Nextiva used data from the Bureau of Labor Statistics to determine how many hours people work in each state, on average, and visualized that data using a map, table, and scatter plot to see trends in hours worked and pay. 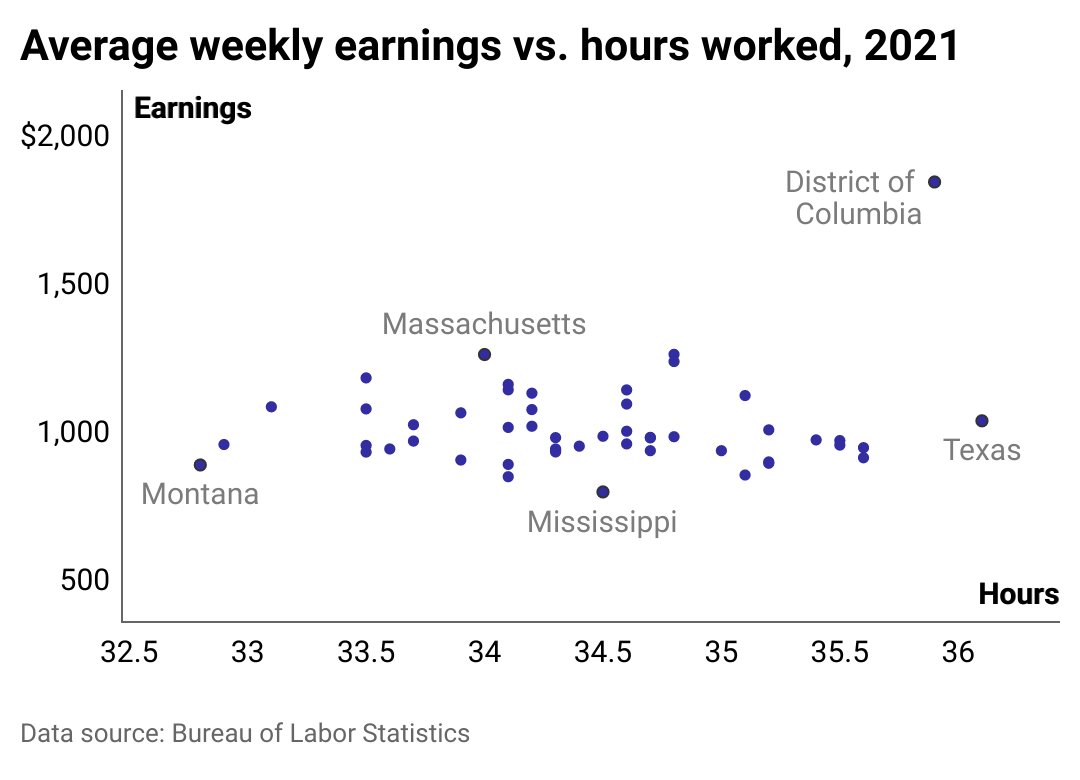 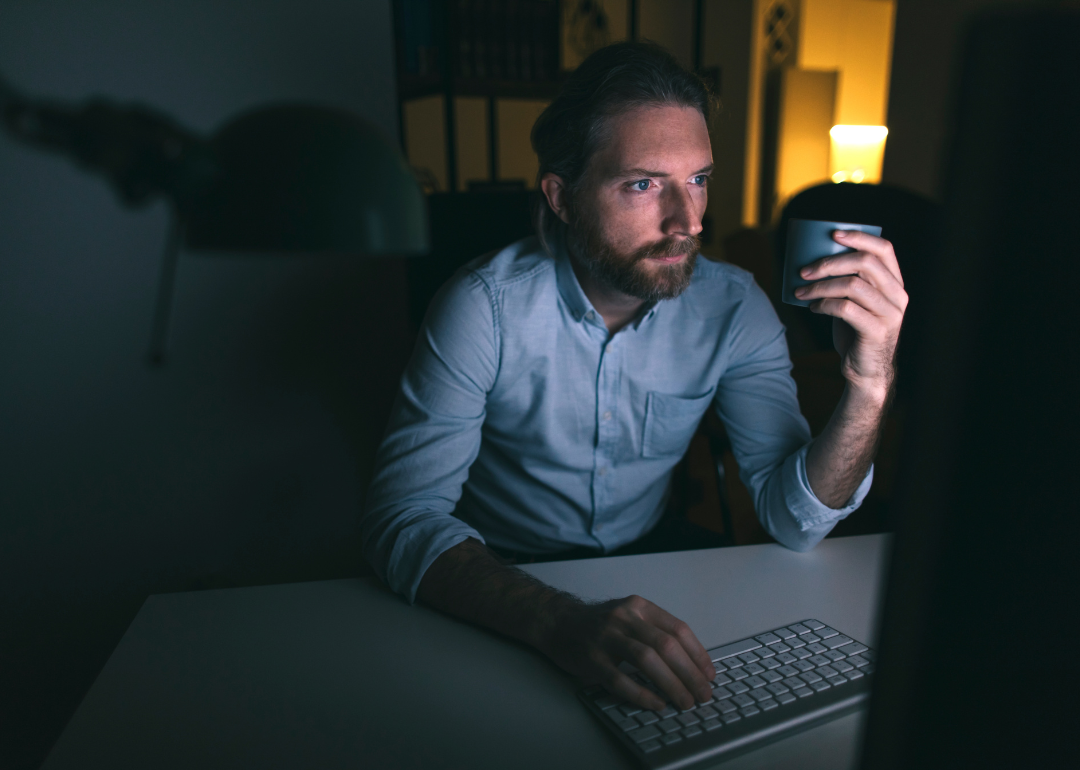 The onset of the pandemic—and the country's subsequent recovery efforts as we emerge from it—completely upended the U.S. workforce. The country saw massive layouts during a short but dramatic two-month recession that ended in April 2020 and then a tight hiring market as employees left jobs at such a rate that experts dubbed it the "Great Resignation." So how has all of these trends impacted how much American workers are putting in each week on the job?

From 2019-2021, Americans in nine states and Washington D.C. worked more than 35 hours per week on average, according to data from the Bureau of Labor Statistics, representing the longest work weeks in the country.

The average wages for American workers at the same time ranged between $26-$28 an hour.

Nextiva used data from the BLS to determine how many hours people work in each state, on average to see trends in pay and hours worked. BLS calculates average weekly hours by dividing all employee hours by the total number of employees, so calculations include both full- and part-time workers. BLS data is based on surveys, and actual values may vary.

During the pandemic, average work hours increased by two to three hours per week, rising alongside wages which grew an average of $2-$3 an hour per week. The top 10 longest work weeks' wages on average in the U.S. ranged in 2021 from about $887 in Kentucky to $1,838 in Washington D.C.

Some professions may contribute to long working hours more than others. Frontline workers who directly provide services—such as nurses, teachers, retail salespeople, wait staff, mechanics, and real estate agents—comprise 70% of the American workforce, according to a July 2022 McKinsey study. The "Great Resignation" and competitive hiring market spurred some states, such as California, Kentucky, and Georgia, to increase wages to attract more candidates: 3% to 7% percent of frontline workers alone quit their jobs since the COVID-19 pandemic began.

Keep reading to discover which states have residents spending the most time on the job. 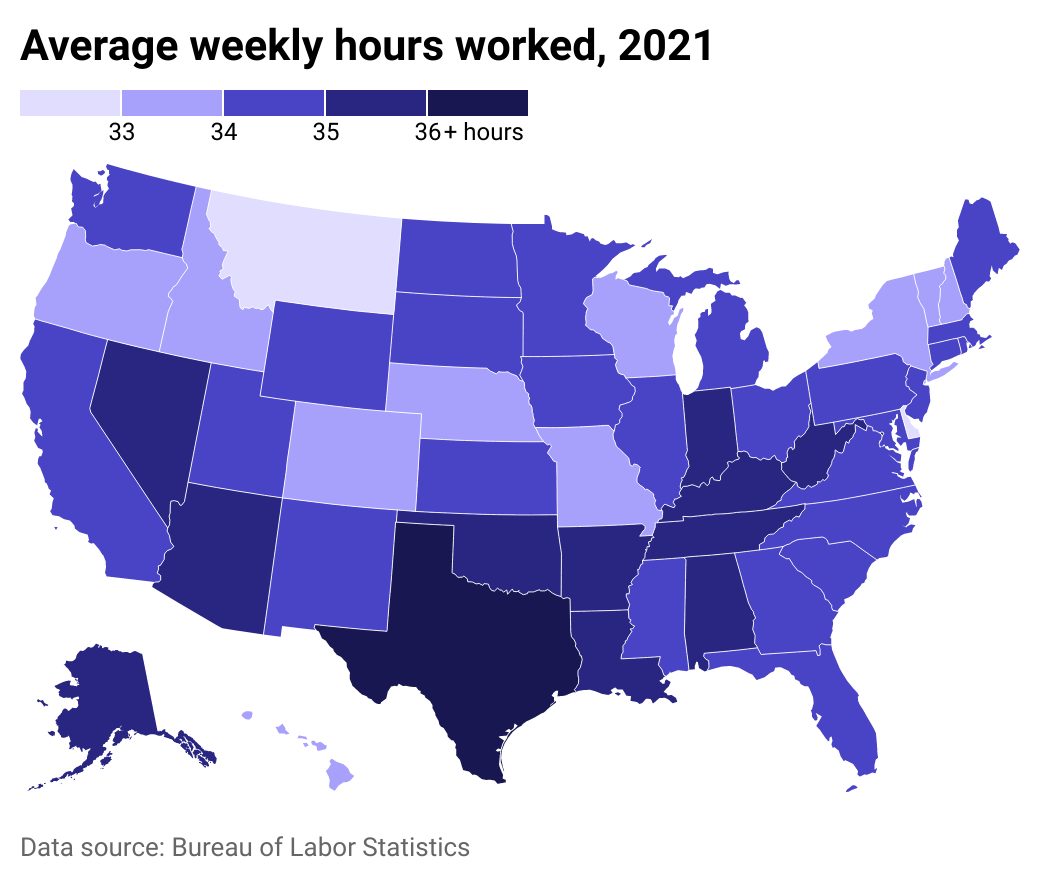 Texas leads the U.S. with the longest work week at 36 hours. Following behind Texans are workers in Washington D.C., Tennessee, and West Virginia, which all average in the 35-hour range. The top 10 states that have the longest working week average about 35-36 hours on the job, with 38 states working fewer hours than this average. 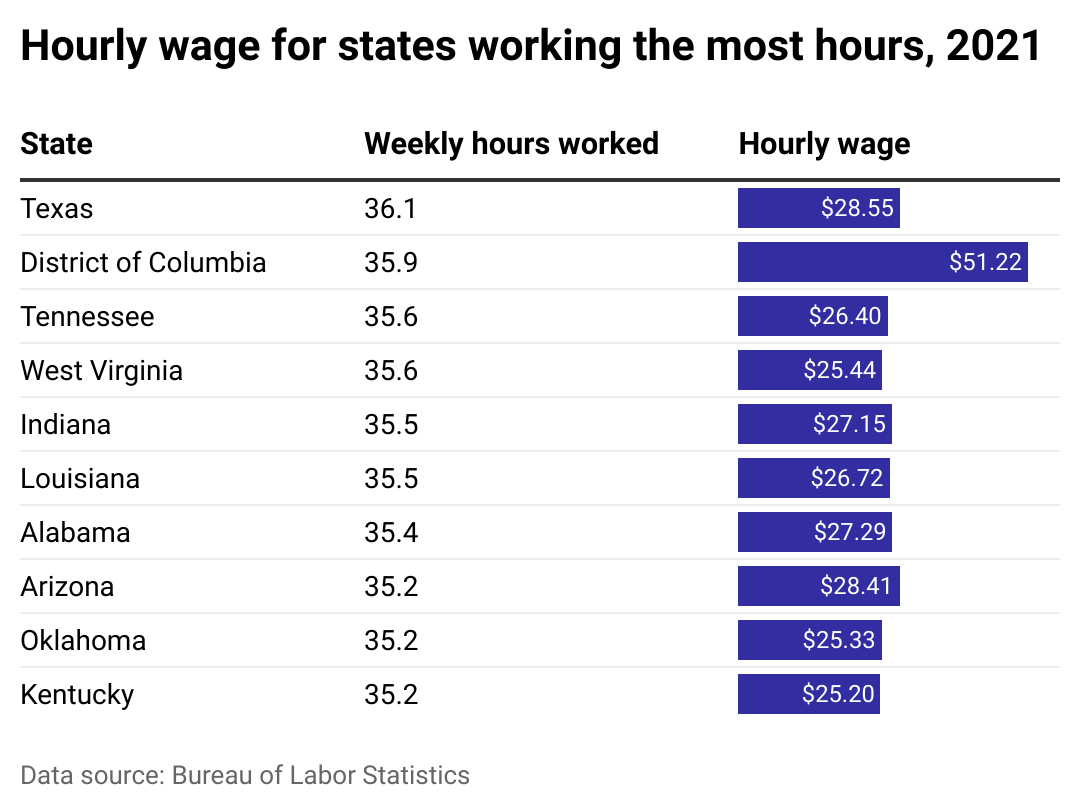 Hourly wages among the states with the most weekly working hours hover over the high-to-mid $20s in 2021. Some states, including Indiana and Tennessee, increased their average hourly wages during the pandemic by a few dollars, potentially signaling efforts among businesses to attract more applicants to roles.

States like Oklahoma, where hourly wages are less than half that of Washington D.C., enjoy a much lower cost of living. Average one-bedroom rentals in Oklahoma start around $900 and rise to more than $1,200 for a luxury apartment in Oklahoma City, according to Apartments.com.

Those that work the most don't necessarily bring home more pay. For example, Oregon's work week averages around 34 hours, with wages hovering at $30 an hour. Meanwhile, Arkansas and Nevada average about 35 hours of work per week, with average wages of $24.14 and $26.56.

On a regional level, Southern states like Tennessee, West Virginia, Louisiana, Alabama, and Kentucky all land in the top 10 for longest work hours per week. Wages earned per week never cross the $1,000 threshold, unlike other states with fewer hours worked on average per week.

The Midwest differs slightly from the South. Iowa's average wages are nearly $5 less per hour than its neighboring state of Illinois, where weekly paychecks average around $1,087.

This story originally appeared on Nextiva and was produced and distributed in partnership with Stacker Studio.