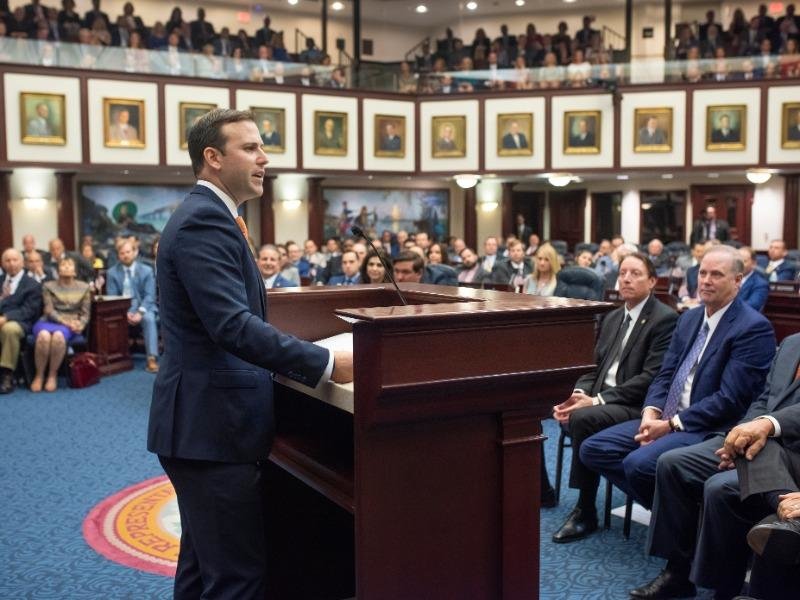 Tallahassee, FL -  Two state Republican leaders added their voices Monday in opposition to a proposed constitutional amendment that would gradually boost the minimum wage to $15 an hour in Florida.

Republican Party of Florida Chairman Joe Gruters, a state senator from Sarasota, and incoming House Speaker Chris Sprowls, R-Palm Harbor, described the ballot initiative as “a Trojan horse,” “a trapdoor,” and “a wolf in sheep’s clothing” that will bring to Florida “failed policies” from liberal cities where streets are “covered in poverty, riots, crime.”

“Voting ‘no’ on Amendment 2 may save your favorite restaurant from closing, or your favorite waiter or waitress from losing their job,” Sprowls, who will become House speaker after the November elections, said during an online press event with a top lobbyist for the restaurant and hotel industry.

Gruters, a certified public accountant, contended the state’s current minimum wage is primarily for entry level positions and that the ballot measure would destroy hundreds of small businesses across Florida.

“This is not about siding with corporations, it's about siding with Florida families,” Gruters said. “If you want to give individuals opportunities in the future to get those entry level positions, like one of the interns in my office who started at minimum wage, and I'm lucky to keep him at $20 an hour in just under a year and a half.”

But prominent Orlando attorney John Morgan, who has spearheaded the drive to pass the amendment, disputed that a minimum-wage increase would result in layoffs or reduced worker hours, as opponents argue.

The minimum-wage hike is one of six proposed constitutional amendments that will be on the Nov. 3 ballot.

Morgan chairs a political committee, Florida For A Fair Wage, that collected enough petition signatures to put the proposal on the ballot. The Morgan Firm P.A. and Morgan and Morgan P.A. have contributed heavily to the political committee, which has spent $4.69 million since the start of 2019. It has raised $4.77 million during the period.

Other backers of the amendment include the Service Employees International Union, the AFL-CIO, Organize Florida and the League of Women Voters of Florida. Supporters contend the incremental increases will stimulate the economy, while reducing dependence on safety net programs like Medicaid.

State Rep. Anna Eskamni, D-Orlando, said Monday the amendment is needed to counter an “anti-worker” agenda in the state “for far too long” by Republican leaders and business groups in Tallahassee.

“It would increase wages for 2.5 million Floridians, or 26 percent of the workforce, and help lift households out of poverty,” Eskamani said during an online call about the state’s troubled unemployment system. “As I mentioned earlier, there are families in Central Florida who live in hotels and motels, these are working families who've never made enough money to put a down payment for an apartment, that never made enough money to actually have the ability to save for a rainy day like this (coronavirus) pandemic has demonstrated.”

“Florida will be the first state in the nation that it (a $15 minimum wage) will pass statewide on the Constitution,” Dover said during the call with Gruters and Sprowls. “In the other states, they have either been done legislatively or by a local municipality. We only wish in Florida that it was going to the state Legislature because I have all the confidence in the world that it would barely make it out of committee. That's how bad it is.”

Florida voters in 2004 passed a ballot measure that has led to smaller increases in the state’s minimum wage. That measure ties increases to inflation.

Florida TaxWatch, in a report this month, concluded that larger companies are better positioned to absorb the impacts of the proposed increase, with some such as Amazon and Costco already offering increased minimum wages to force smaller competitors to match higher starting pay. Meanwhile, TaxWatch surmised that low-wage, low-skilled workers may find it harder to land jobs, older Floridians on fixed-incomes will be hit by inflation and higher prices, and state and local governments will have to cover increased labor costs of their workers and private contractors.

Gruters and Sprowls are not the first GOP lawmakers to denounce the amendment. Rep. Tommy Gregory, R-Sarasota, this month started the political committee Coalition for More Jobs & Better Pay as a way to warn against the ballot initiative.

“The dangers of enshrining a $15 minimum wage in our state’s Constitution cannot be overstated,” Gregory said in a prepared statement last week. “More than half a million jobs for young people, seniors, and others looking to gain new skills at any point in their lives will be in jeopardy. Business owners will face skyrocketing labor costs that will force many to close their doors for good, putting even more people out of work.”

Morgan said he wasn’t surprised by opposition coming from Gruters and Sprowls, as Republican leaders get their “marching orders” from the Florida Chamber of Commerce.

“The fact that they are opposed is the reason we had to do it this way, instead of hoping that legislators would do the right thing we’ve taken democracy straight to the people,” Morgan said.