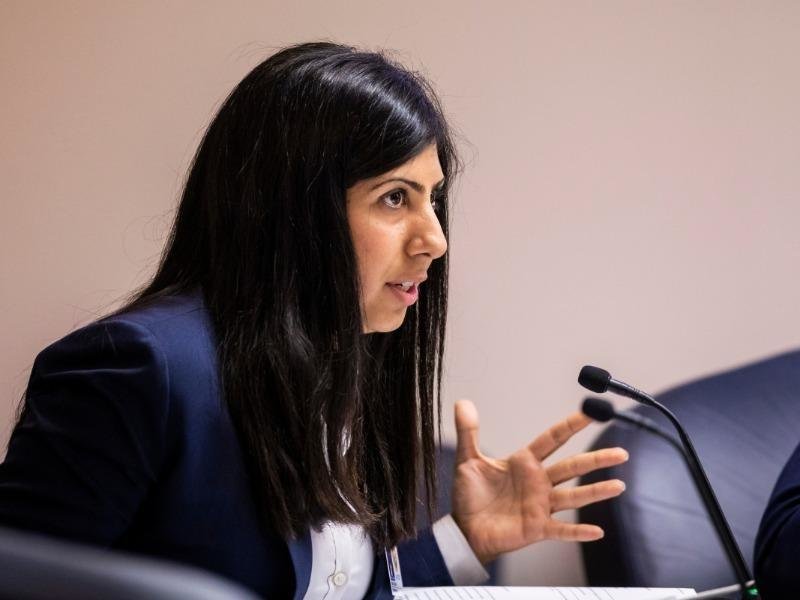 Tallahassee, FL - Floridians struggling since the start of the coronavirus pandemic are being forced to take jobs below their skill levels and at low wages as the state scales back unemployment assistance, opponents of reducing aid said Thursday.

Rep. Anna Eskamani, D-Orlando, along with officials from the Florida AFL-CIO and the Florida People’s Advocacy Center embarked on a long-shot effort to get Gov. Ron DeSantis to reverse a decision to stop providing $300 a week in federal unemployment assistance starting June 26.

Jim Riser, a chef from Boca Raton who has been self-employed for nearly two decades because of disabilities that include diabetes and herniated disks, said the effort to reverse the decision offers some “hope,” as he drew $16,000 from the federal government last year.

“It's horrifying. I have worked in the culinary industry for 37 years of my life and can no longer do the job that I used to when I was younger,” Riser said. “This is causing me to have more anxiety than I can handle. But to give us three weeks to find a job that is capable of paying the bills is almost impossible.”

Eskamani said the overall number of people reaching out to her offices for assistance has eased from the peak of the pandemic in April 2020. But she said the crisis remains dire for people facing eviction and homelessness.

“The past situations where you were able to get some grace from mortgage companies or landlords, a lot of that has come to an end,” Eskamani said. “And so the unemployment system has really been the lifeline for a lot of folks. And the fact that they still can't log in (to the online system). The fact that we have returned to work holds and other types of delays, has really made a bad situation worse. And cutting out these benefits are not going to help folks actually get back to work. If anything, (it) is going to make it more difficult to survive, because instead of looking for that suitable job, you're going to be losing your home.”

State officials and business groups have pointed to the additional federal benefits as playing a role in difficulty drawing people back to work, particularly in tourism and leisure businesses. The U.S. Department of Labor on Thursday estimated Florida had 7,291 first-time unemployment claims filed during the week that ended May 29, down from a revised count of 9,882 the prior week. Those are the lowest weekly numbers since the start of the pandemic in March 2020.

The state’s April unemployment rate was 4.8 percent, reflecting an estimated 487,000 Floridians out of work from a workforce of 10.24 million. The May rate will be released June 18.

DeSantis on Wednesday expressed concerns about inflation as he defended decisions to reinstate a “work search” requirement and to halt distribution of the federal money, which was scheduled to continue into September. The work-search rule, which had been suspended last year because of the pandemic, requires unemployment claimants to apply for five jobs a week.

“I think we have a path to, you know, to put a lot more people back to work, but I also worry about some of those macro signals that we're seeing in the economy. And look, in the last, what 15 months, this federal government has added more to the debt than we've ever seen since World War II,” DeSantis said during an appearance in New Smyrna Beach.

DeSantis acknowledged the changes could cause the unemployment rate to temporarily tick up as more people return to the workforce. But he said across the state “every single person” with a business comes up to him “saying, ‘I need people. I want to hire. We need to hire more people,’” DeSantis said.

“So, I think what's going to happen is, you know, we do have the job search requirements back in, I think the incentives are going to get more folks back in the workforce,” DeSantis continued. “But as you have more people look, you may see the rate go up, because some of the people who are kind of out aren't counted. But then I think you're going to see it go down.”

The state provides a maximum of $275 a week in unemployment assistance. State and business officials have contended that the combination of $275 a week in state aid and $300 a week in federal aid is competitive with weekly pay at many restaurants and other businesses, providing a disincentive for people to return to jobs.

“That's an hourly wage using a 40-hour work week of $7.50 per hour, far less than the minimum wage,” Templin said. “So, we're being told that workers are not seeking employment, because they want to sit at home eating bonbons for less than the minimum wage. This is a completely false, mean-spirited narrative, not based in reality, and certainly not based on any sound policy consideration.”