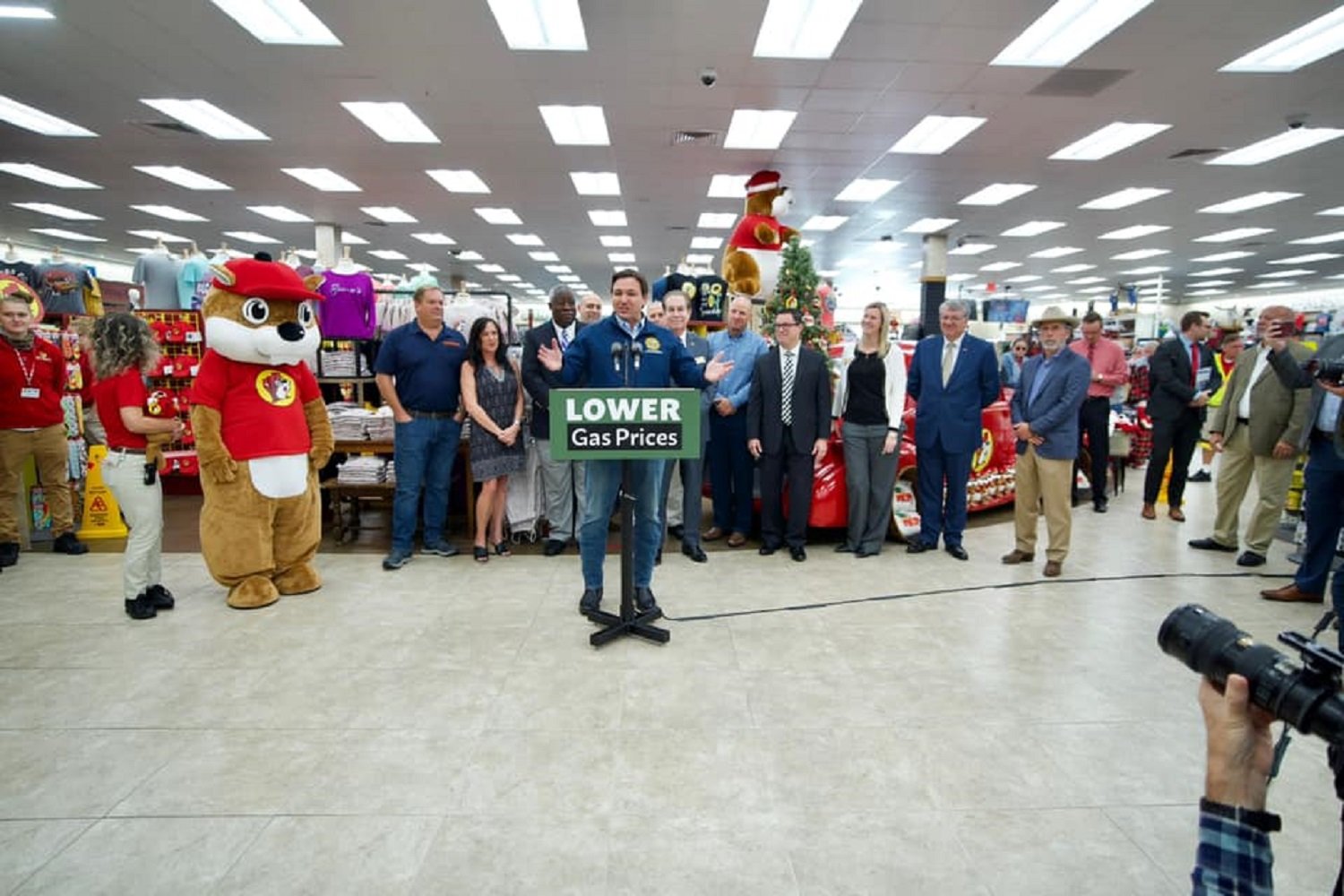 Continuing to contrast his economic approach to the Biden White House, DeSantis said the approximately 25-cent-a-gallon “gas tax relief” proposal could save the average Florida family up to $200 over a five- to six-month period, while reducing state revenue by more than $1 billion. DeSantis wants lawmakers to approve it during the legislative session that starts Jan. 11.

“We've always been very strong on tax relief in Florida. We did things like sportsmen's relief (a sales-tax “holiday” around July 4). We've done back-to-school (tax holidays). We've done all that stuff. And that's good. But this is, I think, really, really big,” DeSantis said while at a Buc-ee's convenience store in Daytona Beach.

Later at a Daily’s convenience store in Jacksonville, DeSantis said, “It's clearly not going to eliminate all the inflation, because it's gone up so much. But it will make a real difference in folks' pocketbooks. And I think we're going to get a lot of good support for that.”

Arch “Beaver” Aplin III, owner of the Texas-based Buc-ee's chain, called the proposal a “phenomenal idea” and said he anticipates “most companies” will lower pump prices when the discount is enacted.

“If this, in fact, happens and they lower the tax, the day they lower it we’ll roll back the pumps the entire 25 cents instantly,” Aplin said.

“We're doing infrastructure, not just roads, including roads, also the water resources, all that,” DeSantis said. “We probably have never had such strong reserves in the history of the state. So, we have the ability to provide relief for people, and I don't think we're going to miss a beat.”

Meanwhile, the AAA auto club reported the price of gas in Florida heading into the Thanksgiving holiday jumped 10 cents in the past week to an average of $3.36 a gallon for regular unleaded.

The mark is the highest for the state since September 2014.

Last year, as motorists cut travel because of COVID-19, gas was selling at an average of $2.03 a gallon heading into the holiday. Two years ago, the average was $2.44 a gallon.

“The good news is gas prices should gradually decline through the holiday,” AAA spokesman Mark Jenkins said in a prepared statement. “Crude oil and gasoline futures dropped last week, and that should restore some downward pressure on prices at the pump."

Jenkin said crude oil prices dropped 6 percent last week to $76.10 per barrel, the lowest since Oct. 1, when the Florida average price for gasoline was $3.05 per gallon.

Last week, Congressman Charlie Crist and Agriculture Commissioner Nikki Fried, who are running to be the Democratic gubernatorial nominee in 2022, separately tossed out the idea of a “gas tax holiday.”

“After calling for Ron DeSantis to help Floridians at the gas pump, he’s finally getting around to helping our working families,” Fried tweeted on Monday. “The gas tax should have been suspended the second oil companies were running up their profits in spring, but better late than never.”

“Governor DeSantis is a day late and a dollar short,” Crist tweeted Monday. “Last week’s not-so-special (legislative) session should have addressed this issue instead of focusing on making COVID easier to spread. As a result, in the best-case Floridians will be waiting months for any reduction in gas taxes.”

Republicans nationally are hammering the Biden administration on inflation issues, with DeSantis, for example, pointing to higher costs for Thanksgiving dinners. The U.S. Farm Bureau on Thursday put the price of a “classic Thanksgiving feast” at $6.41 per person, or up 14 percent from last year, with the per-pound price of a turkey up 24 percent.

“Several factors contributed to the increase in average cost of this year’s Thanksgiving dinner,” Farm Bureau Senior Economist Veronica Nigh said in a prepared statement. “These include dramatic disruptions to the U.S. economy and supply chains over the last 20 months; inflationary pressure throughout the economy; difficulty in predicting demand during the COVID-19 pandemic and high global demand for food, particularly meat.”