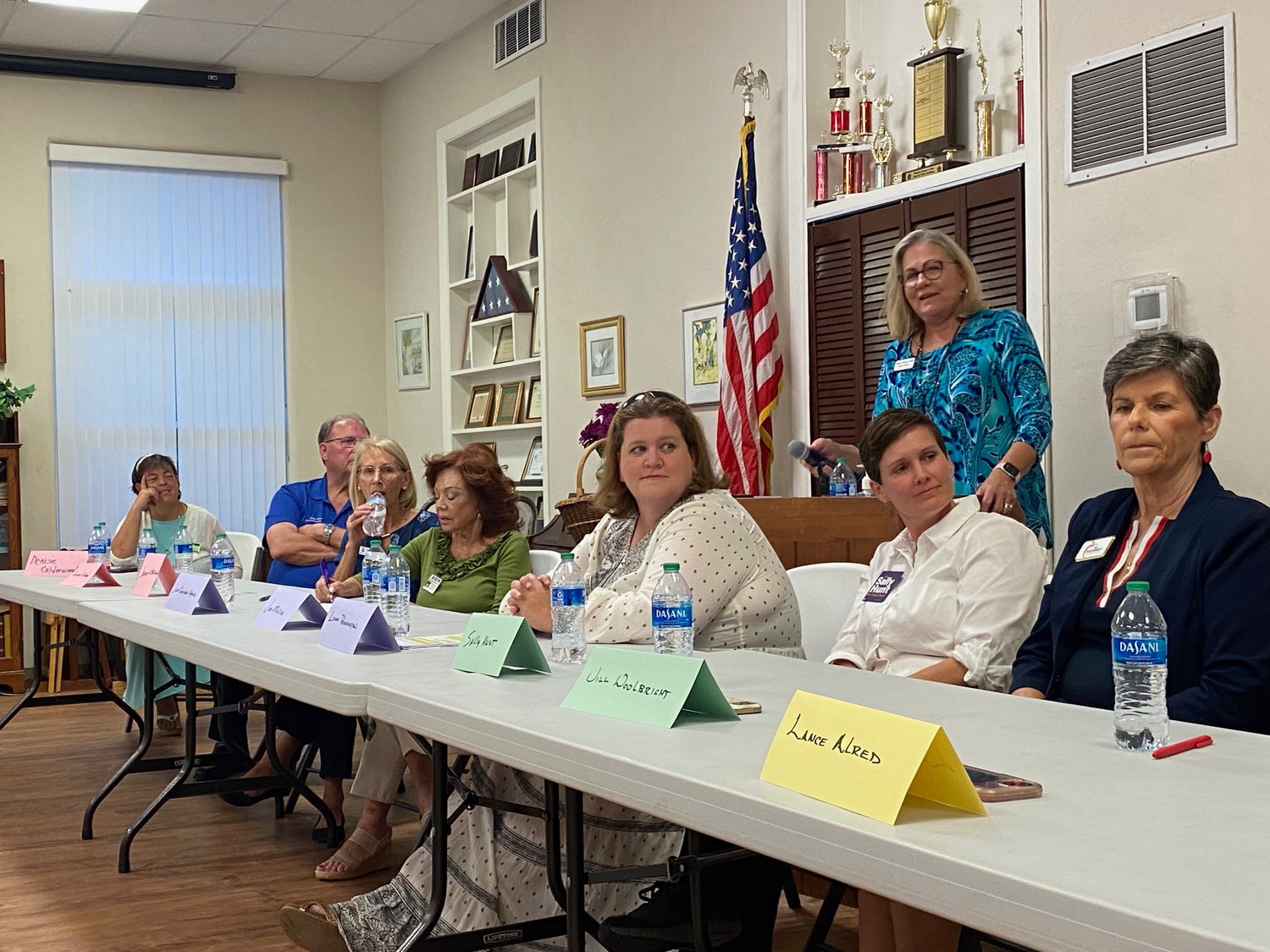 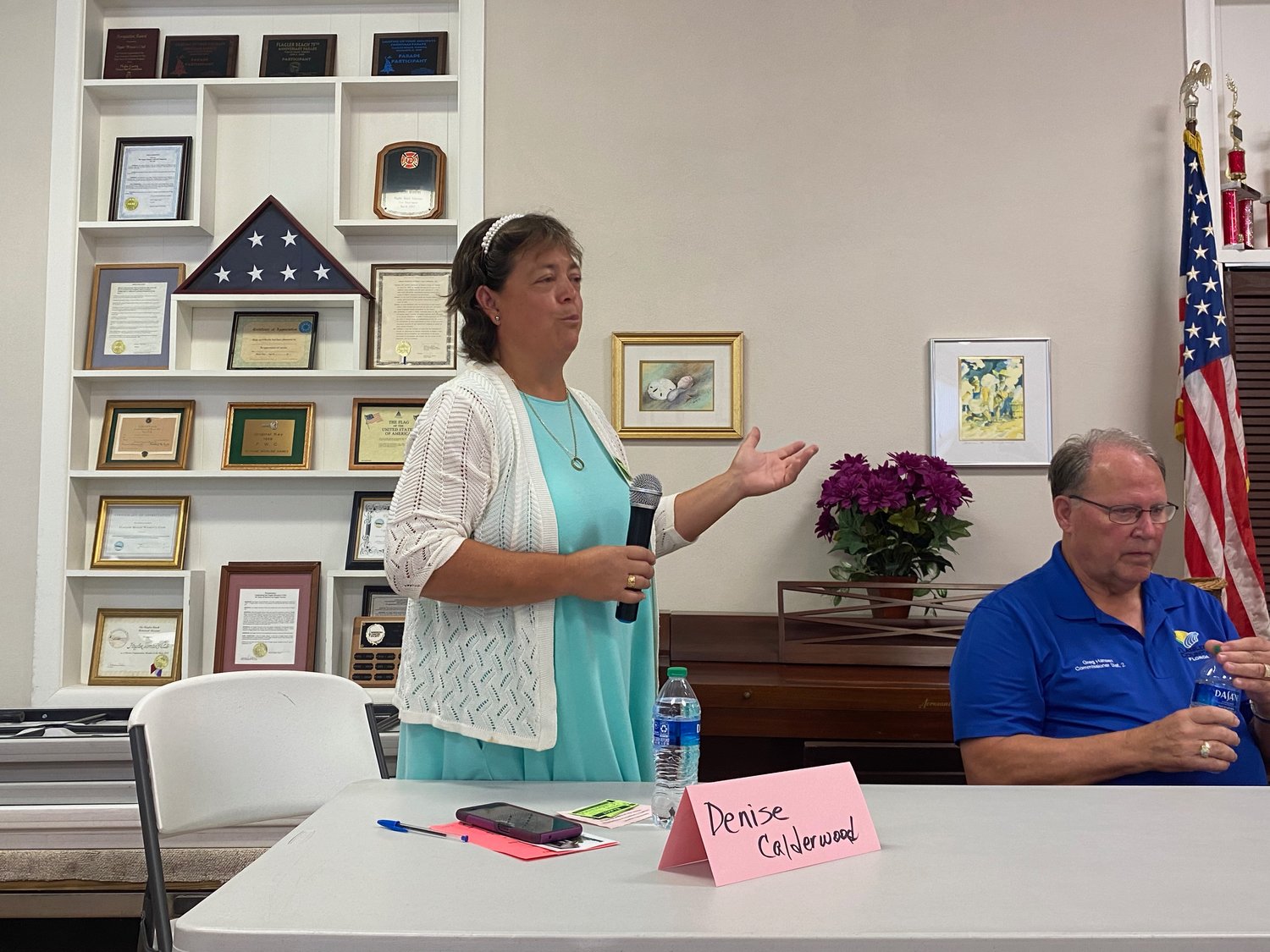 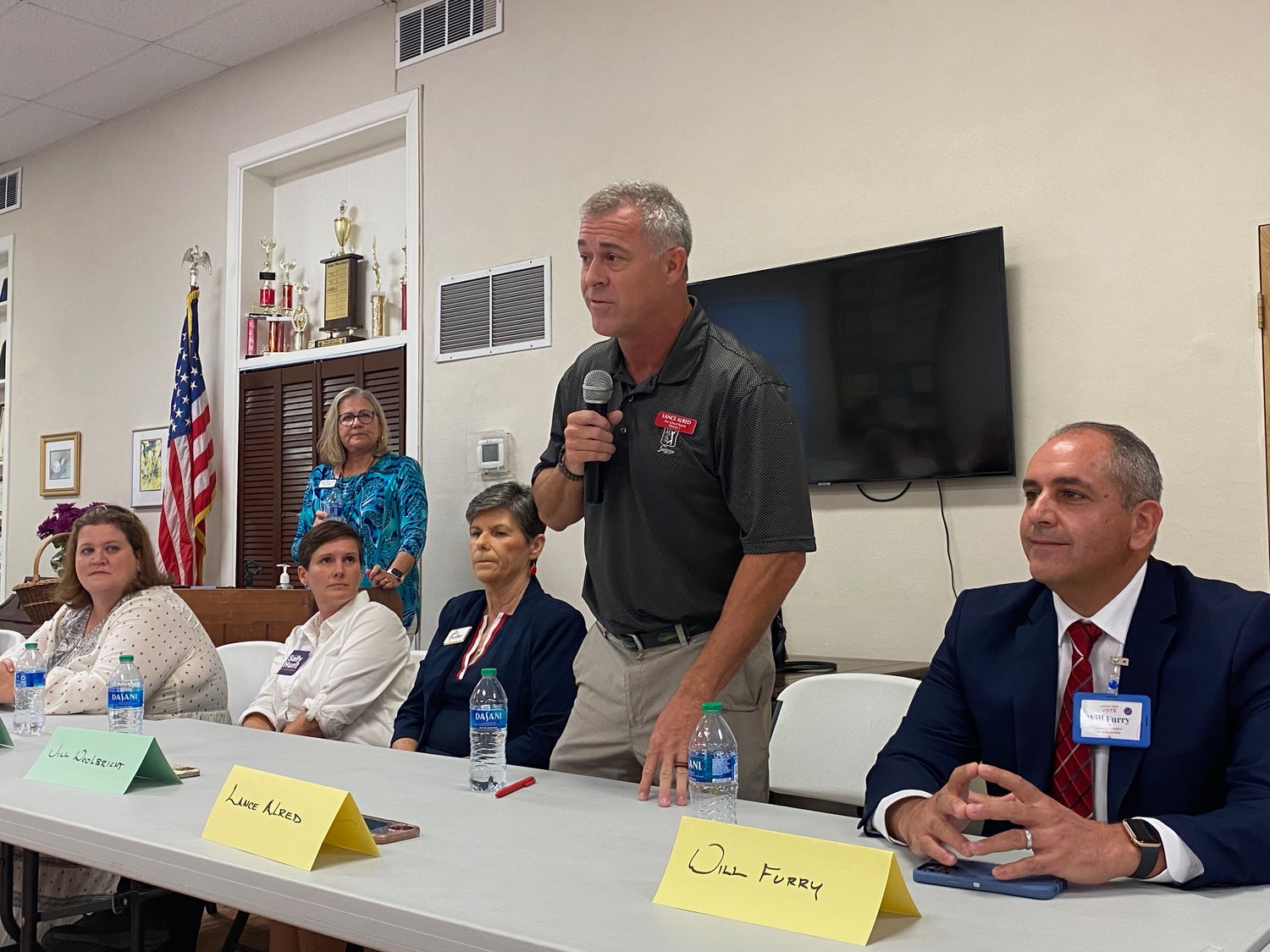 FLAGLER BEACH - The candidates for Flagler County School Board and County Commission assembled Wednesday at the Flagler Women's Club headquarters for a Q&A ahead of the August 23rd primary election.

The candidate turnout was almost perfect - only missing County Commission Chairman Joe Mullins, who is up for re-election. Also absent was write-in candidate County Commission Brett Borden, who has done next to no campaigning and was less expected to attend than Mullins.

The County Commission candidates were all given chances to answer questions from the moderators and attendees, and then the School Board candidates did the same. Things were mostly respectful, aside from some measured jabs between a couple opposing candidates.

Denise Calderwood was the first candidate to get the floor. She challenges incumbent Commissioner Greg Hansen for the District 2 Commission seat. Right off the bat Calderwood criticized the coverage of a previous forum by the Palm Coast Observer, saying she felt they'd made her sound 'like a lunatic'. Moving on to her policy, Calderwood advocated for affordable housing in Flagler County, and cited her experience helping a group of homeless people who'd been situated behind the public library.

Hansen went next, speaking of his career in the U.S. Navy, and then as a Navy lobbyist thereafter. Hansen cited key issues in the county as being homelessness and mental health, and agreed with Calderwood on low-income housing. He also spoke to his inter-municipal relations, describing regular meetings with the mayors of Palm Coast, Flagler Beach, and Marineland.

Janet McDonald, Hansen's other challenger, spoke to her experience moving to Flagler County, career as an educator, and her tenure on the Flagler School Board. She cited a relationship between the School Board and County Commission that could use improvement, particularly where it came to the interlocal agreement between the two entities.

Jane Gentile-Youd spoke next, in her second straight year running for the District 4 seat. She'll face the winner of the Republican primary: incumbent Joe Mullins or challenger Leann Pennington. Gentile-Youd spoke to her 20-year time living in Flagler County, and her criticism with the county's spending habits while she's been a resident.

Commissioner Mullins was acknowledged by the moderators at this point, with them saying he might've been out of state. A Facebook post to Mullins' personal account indicated he was in town, campaigning during the day.

Pennington went next, citing her experience fighting against development on the arsenic-contaminated Matanzas Golf Course. As for the issues, she stated that protecting quality of life and ensuring quality development over quantity would be her key issues if elected to the County Commission.

A minor criticism was lobbied at Hansen by Calderwood, who made comment about his lobbying background. Hansen took the criticism in stride, saying it'd been to procure funds and resources for the Navy.

Sally Hunt was the first to give her pitch among the School Board candidates. Hunt challenges incumbent Jill Woolbright in a two-way race, and cited her experience in corporate America, as well as being an educator and mother. She stated she was running because of the impact the School Board has on Flagler residents, and touted her endorsement by the Flagler Educational Support Professionals Association (FESPA).

Woolbright went next, speaking to her lengthy career in Flagler School as an educator before being elected to the Board in 2020. Elaborating, she touched experience teaching all elementary school grades in a variety of classroom settings. Woolbright pushed a need to 'get back to the basics', cutting social issues out of the classroom in favor of reading, writing, math, etc.

Lance Alred went next, one of three challengers to a seat with no incumbent. Making no allusions to an educational background, Alred instead spoke of his experience as a non-military construction contractor for the Department of Defense, with work experience in Afghanistan. He stated that with $175m of new construction projected for the next five years in the district, his construction experience would prove valuable on the School Board.

Following was Will Furry, the second of three challengers for the District 2 seat. Furry spoke to being a father with kids at Old Kings Elementary School, and pitched his endorsements by the conservative 1776 Project. He hit some of the same notes as Woolbright, stressing the importance of traditional school curriculum as well as his own business background.

The third District 2 candidate to speak was Courtney VandeBunte. Like Woolbright, VandeBunte has experience as an educator within the Flagler school district at Matanzas High School, Flagler Palm Coast High School, and the i3 Academy. Heavy in VandeBunte's statements was the importance of cross-curricular education, the practice of using other subjects as auxiliary resources to boost students' reading scores, citing personal experience with the approach in Flagler.

Next was Christy Chong, challenger against incumbent Trevor Tucker in the District 4 race. Chong cited endorsements by the 1776 Project, Moms for Liberty, and Ron DeSantis, a list which earned her quiet applause in the half-or-so full room. Chong's main theme was parental involvement, as well as prioritizing early learning and school choice. She advocated for no mandates in the district in the future, touching on the proposed mask and/or vaccine mandates which failed to take hold in Flagler Schools in 2021.

Last was Trevor Tucker, the Board Chairman who's served since 2010. Tucker spoke of deep family roots in Bunnell, as well as his lengthy experience on the School Board through a variety of trials and major issues. He identified fiscal responsibility as a priority, and used his Board tenure and accounting degree as evidence to show it was a strong suit of his.

A special question was posed to School Board candidates, asking for one change they'd enact in the school district if they could. Their answers are provided in short below:

The only moment of contentiousness was a brief exchange between Hunt and Woolbright, which didn't amount to much more than statements like 'the choice is clear between us' after a statement by one another.