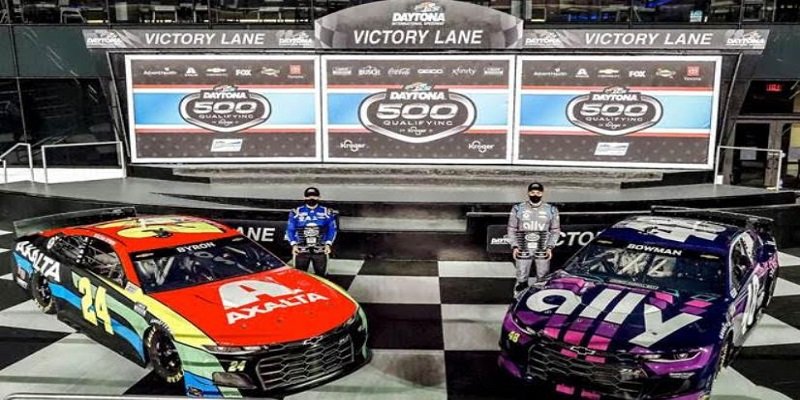 Daytona Beach, FL -  The front row for Sunday's Daytona 500 belongs to Hendrick Motorsports with 27-year-old Alex Bowman taking the pole, beating out his teammate, William Byron by more than a quarter-second during DAYTONA 500 Qualifying Presented By Kroger.

From the NASCAR Wire Service:

Bowman, 27, went out late in the qualifying order (38th of 44 drivers) Wednesday night – the first night-time pole qualifying session in race history - but his Chevrolet handily set the pace with a lap of 191.261 mph (47.056 secs.), taking the top-spot from Hendrick Motorsports teammate William Byron by more than a quarter-second during DAYTONA 500 Qualifying Presented By Kroger.

“It was fast," Byron said, smiling about Bowman’s pole-winning lap.

“It doesn’t really have a whole lot to do with me, right," Bowman said on pit road after qualifying. “It’s a testament to these guys and everybody back in the shop at Hendrick Motorsports. They work so hard on these superspeedway cars. They are beautiful when they get to the race track. Our Ally Camaro has been really fast since we unloaded and they focused a lot on trying to get the pole for the Daytona 500.

“It means a lot to us and we were able to achieve that."

And, he added, “It’s more about the people that make it happen. I floored it, but I’m pretty sure everyone else did too. I’m just appreciative my race car is fast."

Stewart-Haas Racing’s Aric Almirola was third fastest in the No. 10 Ford followed on the speed chart by Bubba Wallace, who earned rave reviews in his debut driving the No. 23 23XI Racing Toyota, which is co-owned by three-time and defending Daytona 500 winning driver Denny Hamlin and NBA Hall of Famer, Michael Jordan. Wallace’s lap was good enough for the top spot only to be taken by Byron three cars later.

Wallace was fastest in an hour-long practice Wednesday afternoon – his first official laps with the new organization and he was clearly feeling optimistic about the week. He finished runner-up in his very first Daytona 500 in 2018.

“Everything’s shaping up to be a great ending for us, we just have to get through it," Wallace said. "It’s kind of the same feeling I had in 2018, my first 500. The speed was there, we qualified decent and had a really good Duel, and finished second in the 500.

“I think the way things are going, we just have to keep it going, keep the positive momentum going. Everything’s kind of going well in the car. I’m confident. Still getting things worked out but all in all, it comes pretty natural when you have a great team behind you."

Wallace said he got a “very positive” text from Jordan after qualifying and said the basketball superstar arrives in Daytona on Thursday in time for the Bluegreen Vacation Duels (7 p.m. ET on FS1, MRN and SiriusXM NASCAR Radio) that will ultimately set the starting lineup for Sunday’s DAYTONA 500.

Hamlin, the three-time defending DAYTONA 500 winner, who is also going for a record third consecutive triumph, was 12th fastest in qualifying. The two joked about Wallace being faster.

“I’m aware," Hamlin said with a smile, adding, “It’s actually a pretty solid qualifying effort certainly for our FedEx team, just barely out of the top 10 there so that’s a good starting spot for us and we’re excited about it.

“Obviously that was a great run by the 23-team. They just barely missed it there by a tenth or so to get that locked in spot (on the front row). But now they get to go out there and race and get the experience they need to get a good finish on Sunday."

Preece and 13th-place qualifier David Ragan were quickest among Open car teams needing to qualify based upon time. The rest of the Open car team drivers - Austin Cindric, Kaz Grala, Timmy Hill, Noah Gragson, Ty Dillon, and Garrett Smithley - will have to battle it out in the Duels with the highest finisher among them in each Duel earning a spot in the DAYTONA 500.

Tickets for Speedweeks Presented By AdventHealth events, excluding the DAYTONA 500, are still available as children 12 and under are FREE in the 100 level seating and $10 in all other reserved seating. Tickets start at $49 for adults for Thursday’s Bluegreen Vacations Duel At DAYTONA, Friday’s Nextera Energy 250, and Saturday’s doubleheader featuring the Beef. It’s What’s For Dinner. ® 300 for the NASCAR Xfinity Series and the Lucas Oil 200 Driven by General Tire for the ARCA Menards Series.

For information and a complete schedule of all racing events as part of Speedweeks, log onto www.DAYTONA500.com or call 1-800-PITSHOP. Tickets are also available for the track’s tripleheader weekend on the DAYTONA Road course (Feb. 19-21), featuring NASCAR’s top three national series.

For more information, photos, and graphics to assist your coverage, register and visit NASCARMedia.com.