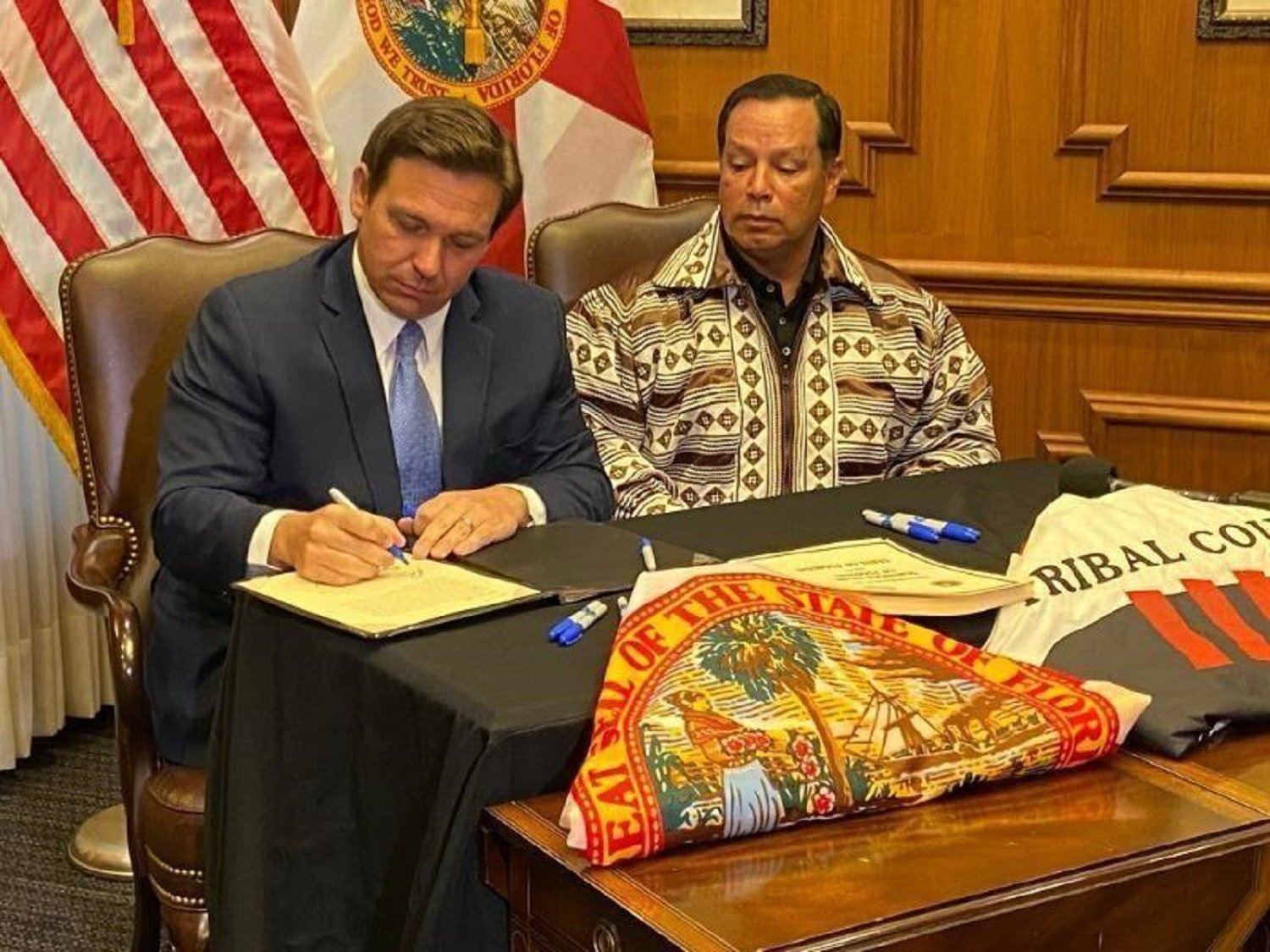 U.S. District Judge Dabney Friedrich’s ruling invalidated a sports betting plan in one of the nation’s most highly sought-after markets and scrapped a deal negotiated by Gov. Ron DeSantis.

Sports betting was included in an agreement, known as a compact, signed by the governor and Seminole Tribe of Florida Chairman Marcellus Osceola, Jr. this spring, and approved by the Legislature during a May special session. The U.S. Department of the Interior, which oversees Indian gambling issues, signed off on the deal in August.

But in Monday’s 25-page decision, Friedrich ruled that the deal violates the federal Indian Gaming Regulatory Act, or IGRA, which creates a framework for gambling activity on tribal lands. The ruling centered on gamblers being able to place sports bets online from across the state, with the wagers run through computer servers on tribal property.

“Altogether, over a dozen provisions in IGRA regulate gaming on ‘Indian lands,’ and none regulate gaming in another location,” she wrote. “It is equally clear that the (Interior Department) secretary must reject compacts that violate IGRA’s terms.”

Although the compact deems sports betting to occur at the location of the tribe’s servers, “this court cannot accept that fiction,” Friedrich wrote.

“When a federal statute authorizes an activity only at specific locations, parties may not evade that limitation by ‘deeming’ their activity to occur where it, as a factual matter, does not,” she added.

Under the 30-year deal, the Seminoles agreed to pay the state at least $2.5 billion over the first five years in exchange for controlling sports betting and being allowed to add craps and roulette to the tribe’s casino operations.

The “hub-and-spoke” sports-betting plan was designed to allow gamblers anywhere in Florida --- except on other tribal lands --- to place bets with mobile apps or other devices, with the compact saying bets “shall be deemed to be exclusively conducted by the tribe.”

Owners of Magic City Casino in Miami-Dade County and Bonita Springs Poker Room in Southwest Florida --- which have been owned by the Havenick family for decades --- filed a lawsuit against U.S. Department of Interior Secretary Deb Haaland and her agency alleging that the sports-betting plan violated federal laws and would cause a “significant and potentially devastating” impact on their businesses.

Friedrich’s ruling, which came weeks after the tribe quietly launched its mobile sports-betting app, injects uncertainty into the Seminoles’ future sports-betting activities. The tribe’s Hard Rock app was still accepting wagers Tuesday morning, and a spokesman did not say whether the Seminoles plan to shut it down.

“The Seminole Tribe is reviewing the judge’s opinion and carefully considering its next steps,” Gary Bitner, a spokesman for the tribe, said in an email.

But Magic City called Friedrich’s ruling a “victory for family-owned businesses like ours who pay their share in taxes and believe the free market should guide the business operations of gaming venues.”

“We look forward to working with the governor, Legislature and stakeholders to pave a path forward that ensures a fair gaming marketplace exists in Florida," the pari-mutuel operator said in a prepared statement.

In a court document filed this month, lawyers for Haaland conceded that the sports-betting plan would allow bets to take place off tribal land but said the state had authorized the wagers, calling it a “permissible hybrid approach” that complies with state and federal law.

But Friedrich found that the government’s reliance on Florida law to defend the compact “misses the mark” because the agreement authorizes gaming off and on Indian lands.

Speaking to reporters Tuesday in Broward County, DeSantis said he negotiated the agreement with the tribe because he felt the state wasn’t receiving enough money under a previous deal with the Seminoles, whose Tampa casino is one of the nation’s most profitable. The governor, a lawyer, acknowledged that the hub-and-spoke plan was an “unsettled legal issue.”

“They wanted to do the sports (betting), and so we said ‘fine.’ And the reason why I'd said that is because it would probably pass on a referendum anyways. And then if a company gets it, the tribe gets it anyways. So, we felt that that made sense,” he said.

The governor said the state, which is not a party in the lawsuit, would support an appeal by the federal government.

The compact was structured to allow the state to continue reaping revenues from the Seminoles’ gambling activities if the sports-betting provision was struck down, DeSantis noted.

But Friedrich’s order vacated the entire compact, saying “the practical effect of this remedy” reinstates a 2010 agreement with the Seminoles that expires in 2030. That deal gave the tribe the ability to offer banked card games, such as blackjack and baccarat, at most of its casinos. The tribe stopped making payments to the state in 2019 after a drawn-out dispute over “designated player” card games offered by pari-mutuels around Florida.

Friedrich also found that the new compact violated a 2018 Florida constitutional amendment that requires statewide approval for expansions of gambling, including sports betting.

But the judge noted that her decision “does not foreclose other avenues for authorizing online sports betting in Florida.”

For example, she wrote, the state could negotiate a new compact with the tribe “that allows online gaming solely on Indian lands.”

Friedrich also suggested that Floridians could approve a citizens’ initiative to allow online sports betting, an effort already underway that could get a boost from her ruling.

As of Tuesday, the state Division of Elections had received 116,437 valid petition signatures from the Florida Education Champions committee sponsoring the initiative. The committee would need to submit 891,589 signatures to get on the November 2022 ballot.

The committee “is confident” that it can meet the deadline, spokeswoman Christina Johnson said in a prepared statement.

“Our effort was always mutually exclusive from the compact. Florida Education Champions’ focus remains in securing the nearly 900,000 valid petitions to make the November 2022 ballot,” she said.