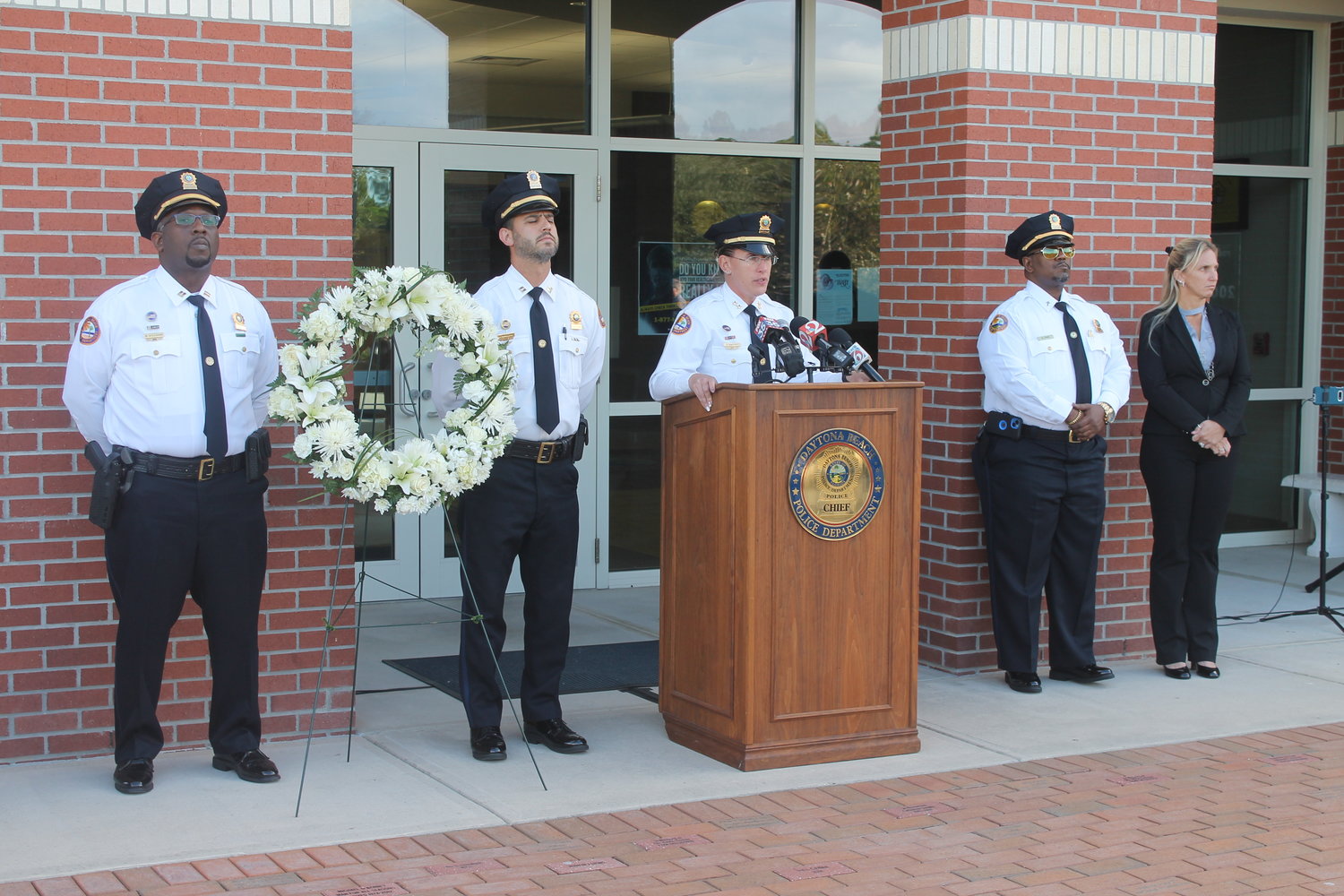 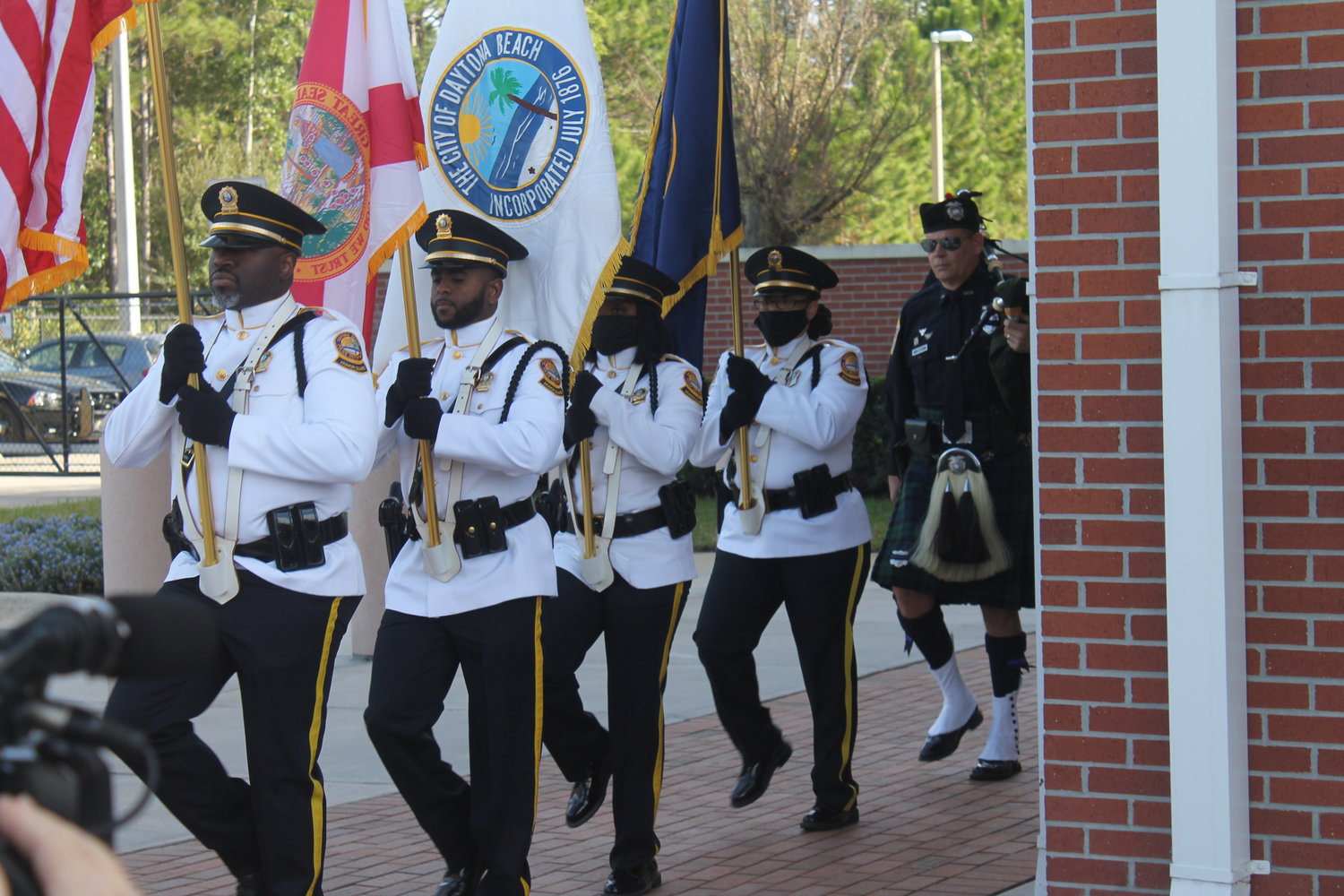 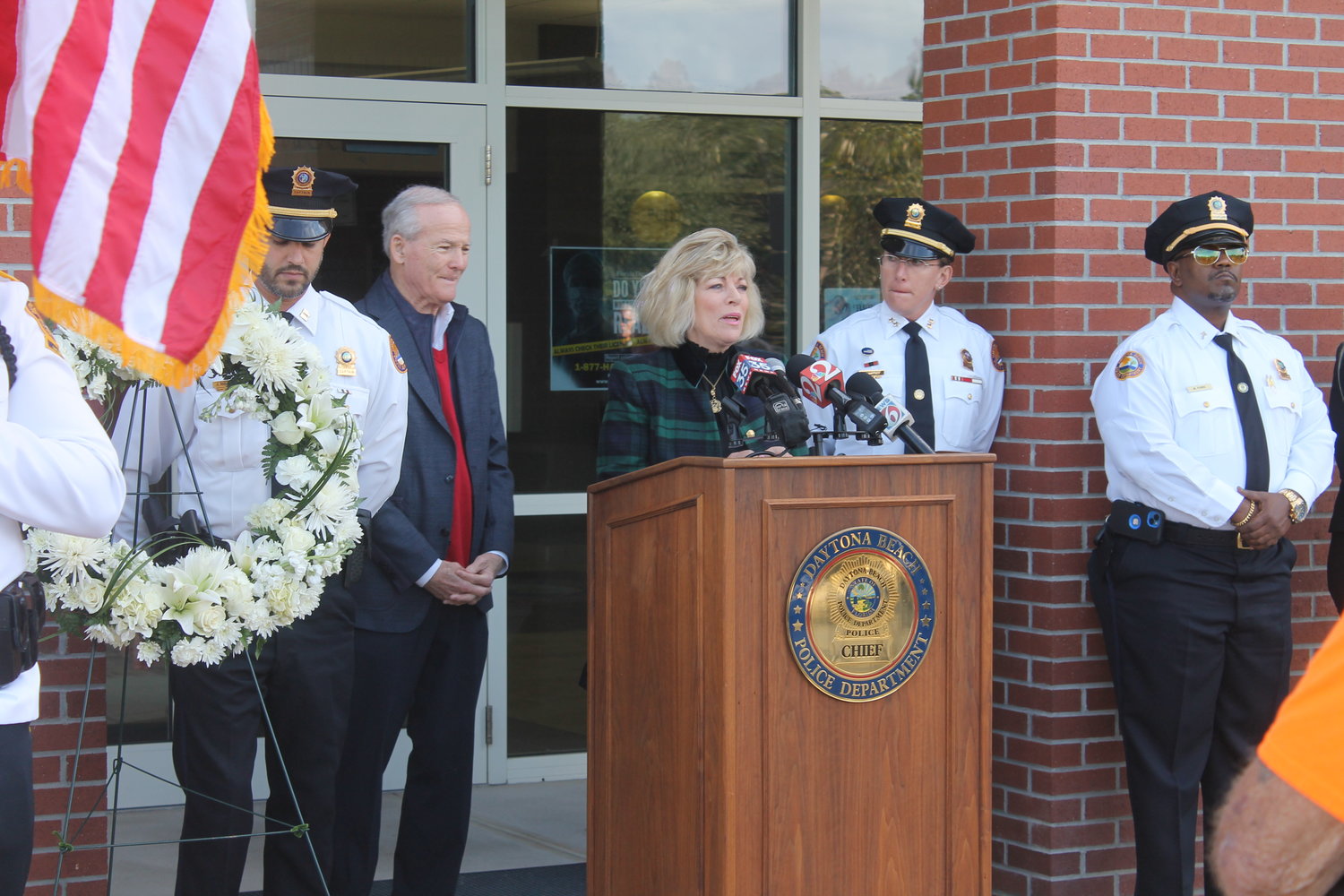 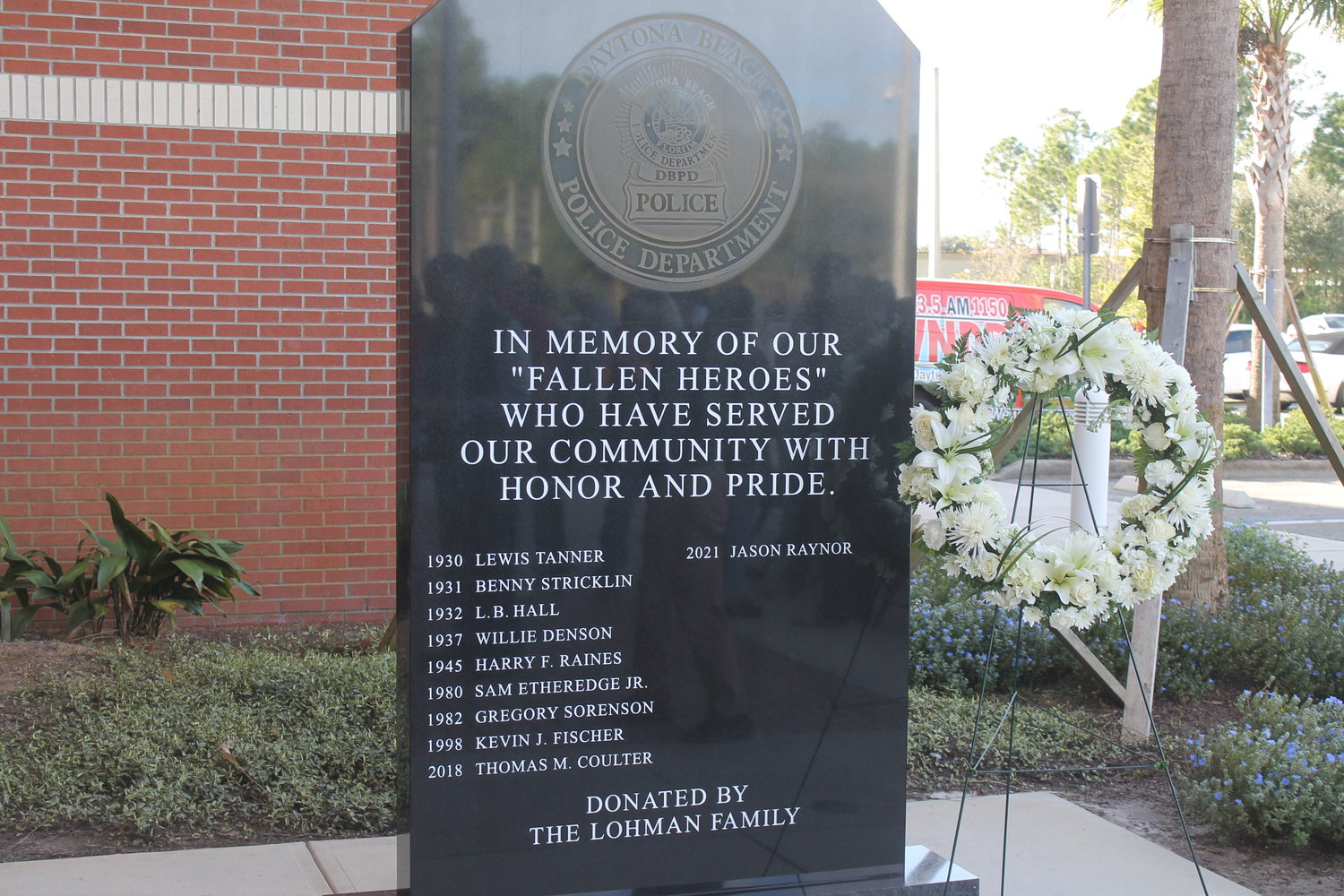 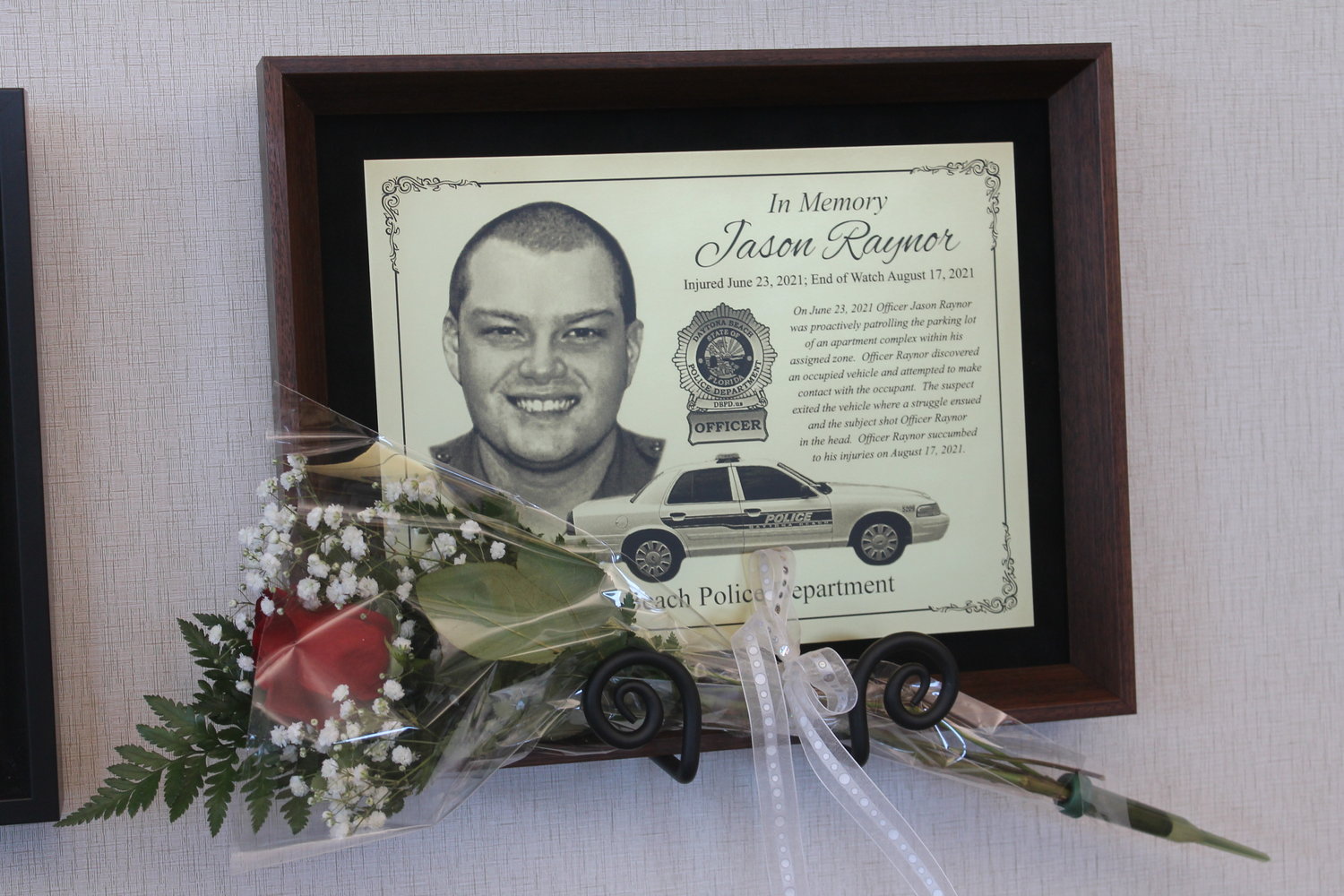 The new name added to the memorial is Officer Jason Raynor, whose memory was honored again on Thursday (Jan. 12), along with other Daytona Beach police officers who lost their lives in the line of duty. Raynor's name and photo was also introduced to the department's wall of fallen officers, all while his family was in attendance.

This occasion also marked the reveal of a brand new memorial. Back in 2019, the fallen officer memorial was destroyed in a landscaping accident. At the time, the most recent name added to the memorial was Thomas Coulter, a Daytona Beach police officer who died during a training exercise in 2018.

And while it's nearing a year since his death, Raynor's name is still fresh on the minds of residents and community partners such as Nancy Lohman, who was instrumental in sourcing the monument. She said it's good to see the community come together to honor these fallen officers as many are still healing after Raynor's loss.

"Words aren't enough, you have to stop and come together as a group of human beings with a human connection and have a moment together," said Lohman.

Port Orange City Councilman Chase Tramont was also in attendance and expressed how thankful he is for law enforcement officers and the sacrifices they make.

"I've always said the greatest heroes next to our military service men and women are law enforcement officers," said Tramont. "They're the ones who put their lives on the line day in and day out to protect us here at home."

The ceremony began with a speech by Deputy Chief Jennifer Whittet—who led the ceremony in Chief Jakari Young's stead, as he was unable to attend. Following remarks from Whittet, the Daytona Beach Police Department honor guard presented colors and stood by as the ceremony carried on. After further remarks and prayer, everything wrapped up with a playing of Amazing Grace on bagpipes.

At the end of the ceremony, the DBPD held a small private ceremony for Jason Raynor's family as they presented a framed etching of the fallen officer that will now forever hang on the walls of the Daytona Beach Police Department.

Raynor was killed in the line of duty after he was gravely injured by Othal Wallace, who could face the death penalty because of his crime. In total, 10 names are now etched into the memorial.