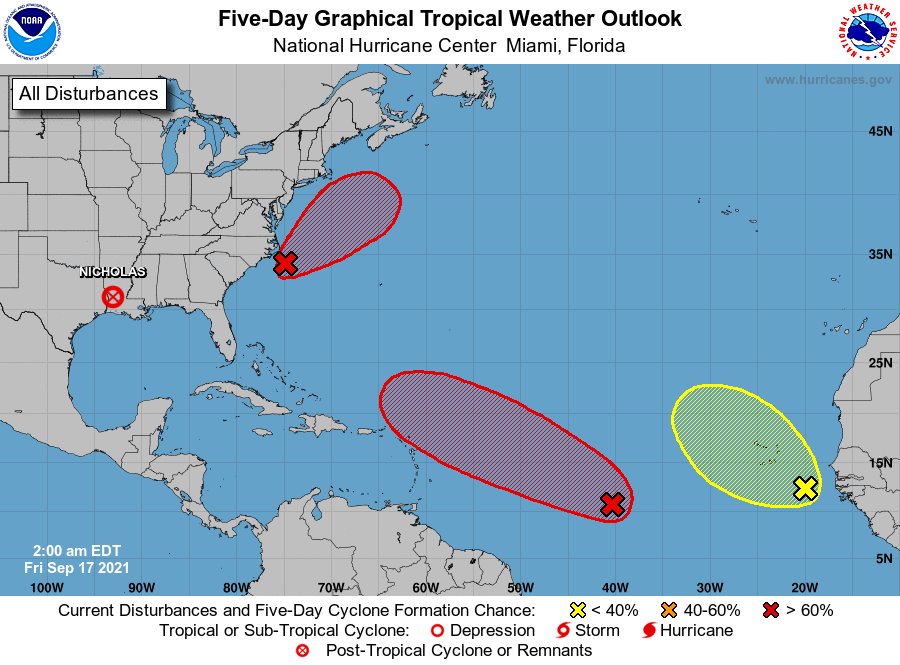 The closest to the United States is Invest 96-L, a broad area of low pressure located about 100 miles southeast of the Outer Banks of North Carolina. As of Friday morning (September 17), 96-L's circulation has become better defined since Thursday, but associated showers and thunderstorms remain disorganized and located mainly well east of the center.

According to NHC meteorologists, environmental conditions are becoming more conducive for development. With that, a tropical depression is likely to form during the next day or so as the system moves northward to north-northeastward off the southeast and mid-Atlantic U.S. coasts.

Regardless of where and how the disturbance develops, forecasters believe the system could bring high surf to portions of the southeast and mid-Atlantic U.S. coasts throughout the upcoming weekend.

In the southeast corner of the northern Atlantic Basin, a conglomeration of disorganized showers and thunderstorms remain in association with a tropical wave and broad area of low pressure located over 1,000 miles west-southwest of the Cabo Verde Islands.

NHC forecasters say environmental conditions are expected to be conducive for development during the next few days, and a tropical depression could still form over the weekend. The system is still too far out to determine whether or not it could affect the United States within the next few days.

The system is expected to move west to west-northwestward at 15 to 20 mph during the next several days.

Just off the coasts of Senegal and The Gambia lies a collection of disorganized cloudiness and thunderstorms with a tropical wave.

The NHC says environmental conditions are forecast to be only marginally conducive, and development, if any, should be slow to occur over the next few days.

Even though Florida remains clear of any current tropical threats, it looks like the state is still in for a deluge over the weekend. Reports from the National Weather Service in Melbourne say the Daytona Beach area can expect a 70 percent chance for rain and thunderstorms on Saturday (September 18). Chances for rain will then fall to 50 percent overnight into Sunday.

Sunday, however, will bring similar conditions with a 70 percent chance of rain and thunderstorms. The chance for rain will then drop to 40 percent headed into Sunday night before increasing again to 60 percent on Monday.