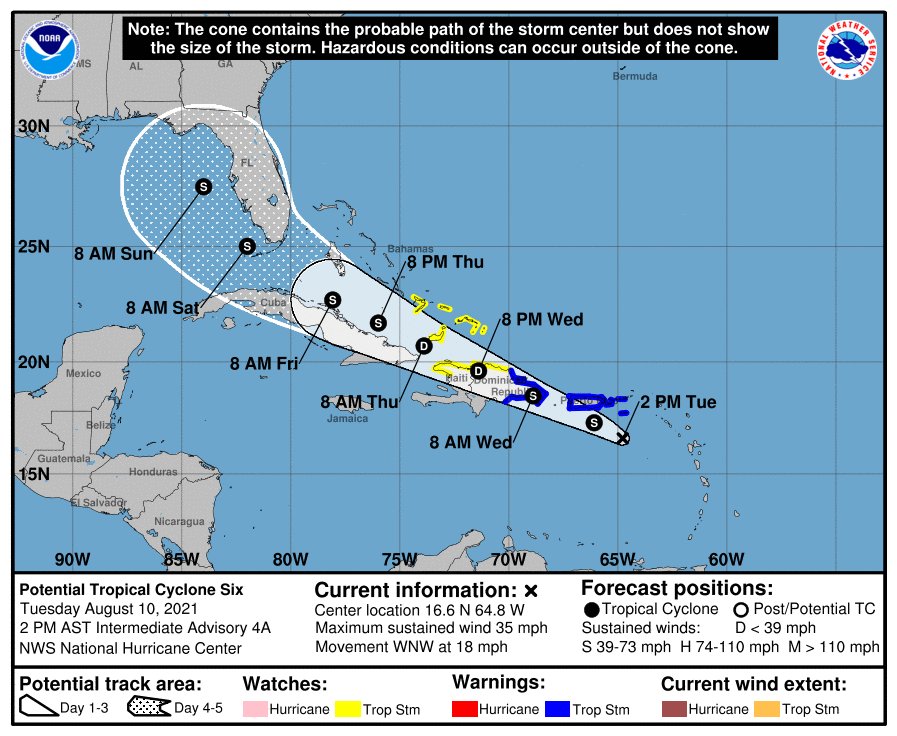 Daytona Beach, FL - Tropical storm warnings have been issued for Puerto Rico, the US Virgin Islands, and parts of the Dominican Republic as Potential Tropical Cyclone 6 (PTC 6), soon to be Fred, continues on a northwesterly path.

The 2:00 p.m. report from the National Hurricane Center (NHC) says PTC 6 has become better organized since Monday (August 9) and satellite intensity data estimates the system is at tropical storm strength. However, data from a NOAA Hurricane Hunter aircraft and surface observations indicate that the system remains at potential tropical cyclone status with an initial intensity of 30 knots.

As of Tuesday afternoon (August 10), the system remains on a west-northwestward motion at around 16 knots. Forecasters believe a strong low to mid-level ridge should steer the system west-northwestward for the next three days with some decrease in forward speed after 24 hours. Track guidance has changed little since the previous advisory. As such, the new track from the NHC also has little change and lies near the various consensus models.

Conditions continue to appear favorable for strengthening before the system reaches Hispaniola in the next 24 hours, although there may be dry air entraining into the system in the southeastern quadrant.

If there is little change between now and Wednesday (August 11), forecasters believe PTC 6 will become a tropical storm before it makes landfall on the southeast coast of the Dominican Republic. From there, the storm is expected to drop in strength and return to tropical depression status before exiting back into the Atlantic between the Bahamas and Cuba early Thursday (August 12) morning.

Once over the Atlantic, it's possible that the system could become a tropical storm again before reaching southern Florida sometime around Saturday (August 14) morning.