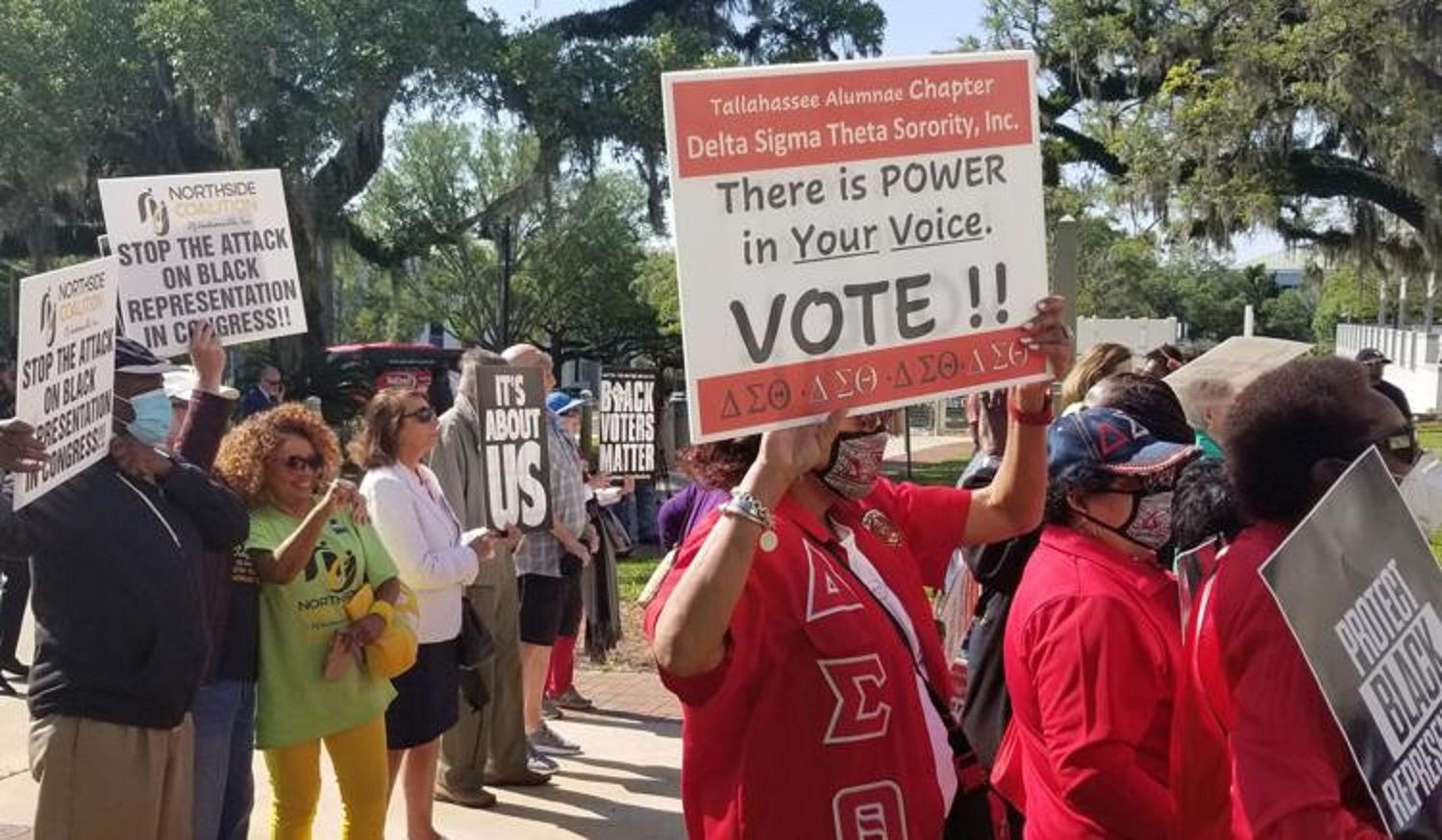 The Senate is expected to vote Wednesday to pass the plan, which would boost Republican representation in Congress for the next decade. The House is expected to follow suit Thursday.

The Republican gains could come, at least in part, at the expense of minority candidates in North and Central Florida. The Senate Reapportionment Committee voted 8-4 along party lines Tuesday to approve the bill, but Sen. Randolph Bracy, D-Ocoee, told Republicans on the committee they have allowed themselves to be bullied by DeSantis, who has threatened to back their primary opponents.

“Once you give in, it doesn’t stop. He’s going to continue this,” Bracy said.

Republican committee members did not comment before the vote. Chairman Ray Rodrigues, R-Estero, declined to comment after the meeting.

Under the proposal, the number of Republican-held congressional seats would be expected to increase from the current 16 to 20, based on 2020 voting patterns. Legislative approval will set the stage for a legal fight about the map.

During an earlier meeting on the Senate floor, Sen. Gary Farmer, D-Lighthouse Point, sought to delay until Thursday a final Senate vote on redistricting. But Senate President Wilton Simpson, R-Trilby, said that wouldn’t change the final tally on the measure and other bills related to the Walt Disney Co.

“The consequence of your request would just delay this by one more day,” Simpson told Farmer. “It would not change the outcome of those bills, in my opinion.”

The Disney-related bills were added to the special session Tuesday, after the entertainment giant criticized a new state law that would restrict instruction in public schools about gender identity and sexual orientation. The bills, in part, could lead to dissolving the Reedy Creek Improvement District, a decades-old governing district set up for Disney and nearby properties.

DeSantis called the special session after vetoing a congressional redistricting plan passed by the Legislature last month. DeSantis contended the Legislature’s plan violated the Equal Protection Clause of the U.S. Constitution, in part because of a sprawling North Florida congressional district that has elected a Black Democrat.

DeSantis has pushed for the District 5, which now runs from Jacksonville to west of Tallahassee, to be redrawn as a more-compact district in the Jacksonville area. The seat is currently held by U.S. Rep. Al Lawson, a Black Democrat.

DeSantis also would make significant changes in Central Florida’s District 10, which has been held by U.S. Rep. Val Demings, a Black Democrat who is running for U.S. Senate.

Appearing before the Senate committee, the Rev. Robert Spooney of Mt. Zion Missionary Baptist Church in Orlando asked if it is “morally” right to eliminate two minority districts and if Republican lawmakers would stand up for the redistricting plan that DeSantis vetoed.

“You came up with a map, and now it's been vetoed and turned around,” Spooney said. “Will you stand up and do the right thing or will you bow down and be bullied?”

“Redistricting to me is to equalize the populations among electoral districts after publication of the (U.S.) Census,” said Brigitte Smith of Marion County. “But it seems today it’s all about race issues and color.”

Alex Kelly, a deputy chief of staff for DeSantis, told the Senate committee he drafted DeSantis’s map and followed many of the lines that the Legislature initially crafted, particularly when it came to South Florida.

Using a phrase from DeSantis, Kelly said changes in North and Central Florida were done in a “race neutral” manner.

For District 5, Kelly said the current sprawling configuration, which was included in one of two vetoed maps passed by the Legislature, is a “racial gerrymander.” He said an alternative design for the district from the Legislature would have violated “some manner of law.”

But Democrats criticized the proposed changes in DeSantis’ plan.

“This (the redistricting plan) is not for tomorrow or next week. It doesn’t change for 10 more years, and I refuse to believe the people of color population in Duval (County) shrunk,” Sen. Audrey Gibson, D-Jacksonville, said.

As for District 10, following lines initially offered by the House, Kelly said the Black community in Orange County “wasn’t sufficient enough on its own to elect a candidate of its choice.”

Bracy, who has filed to run in Congressional District 10, said the proposed change in the district “clearly goes against the (federal) Voting Rights Act,” as the area’s representation could shift from Demings to conservative Anthony Sabatini, a Howey-in-the-Hills Republican who is now in the state House.

The Republican majority on the committee rejected in a voice vote a proposed amendment by Sen. Darryl Rouson, D-St. Petersburg, that would have restored District 5 and 10 as minority-access seats and removed a proposed split in the Tampa Bay region.

“The intent of this amendment is to protect minority access districts from retrogression,” Rouson said.