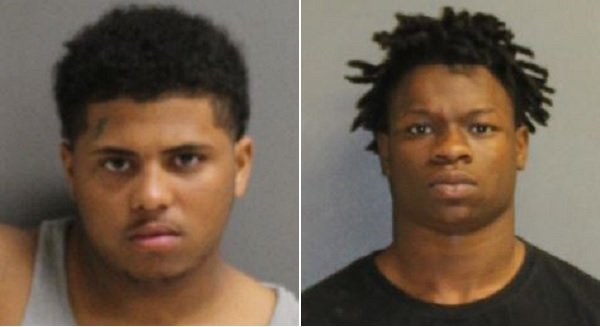 DeLand, FL - The Volusia Sheriff's Office is reporting the arrest of two suspects  after a License Plate Reader alerted them to a stolen vehicle traveling on I-4 last night (February 5). Arrested are 19-year-old Nicholas Hiatt of DeLeon Springs and 19-year-old Limuel Yarn III of DeLand.

Lake Helen police spotted the car traveling at high speeds on S.R. 44. Air One went up and saw the vehicle crash into a pole and two occupants flee into the woods. Hiatt was apprehended quickly by a deputy and K-9 officer while trying to hide under a horse trailer. He has an open warrant for possession of a firearm by a convicted felon. Yarn was arrested in the woods without incident.

You can see Air One and bodycam footage by clicking here.

At the scene of the crashed vehicle, deputies recovered a Ruger 10/22 rifle and 11 rounds on the ground next to the driver's door. In the glove box, deputies found a loaded Walther PK300 .380 caliber handgun.

Hiatt is charged with grand theft auto, armed trespassing, new charges of possession of a firearm and ammunition by a convicted felon, resisting arrest without violence and driving with a suspended license.  He's being held without bond.

Yarn is charged with armed trespassing, possession of a weapon and ammunition by a delinquent and resisting arrest without violence. His bond is set at $30,500.