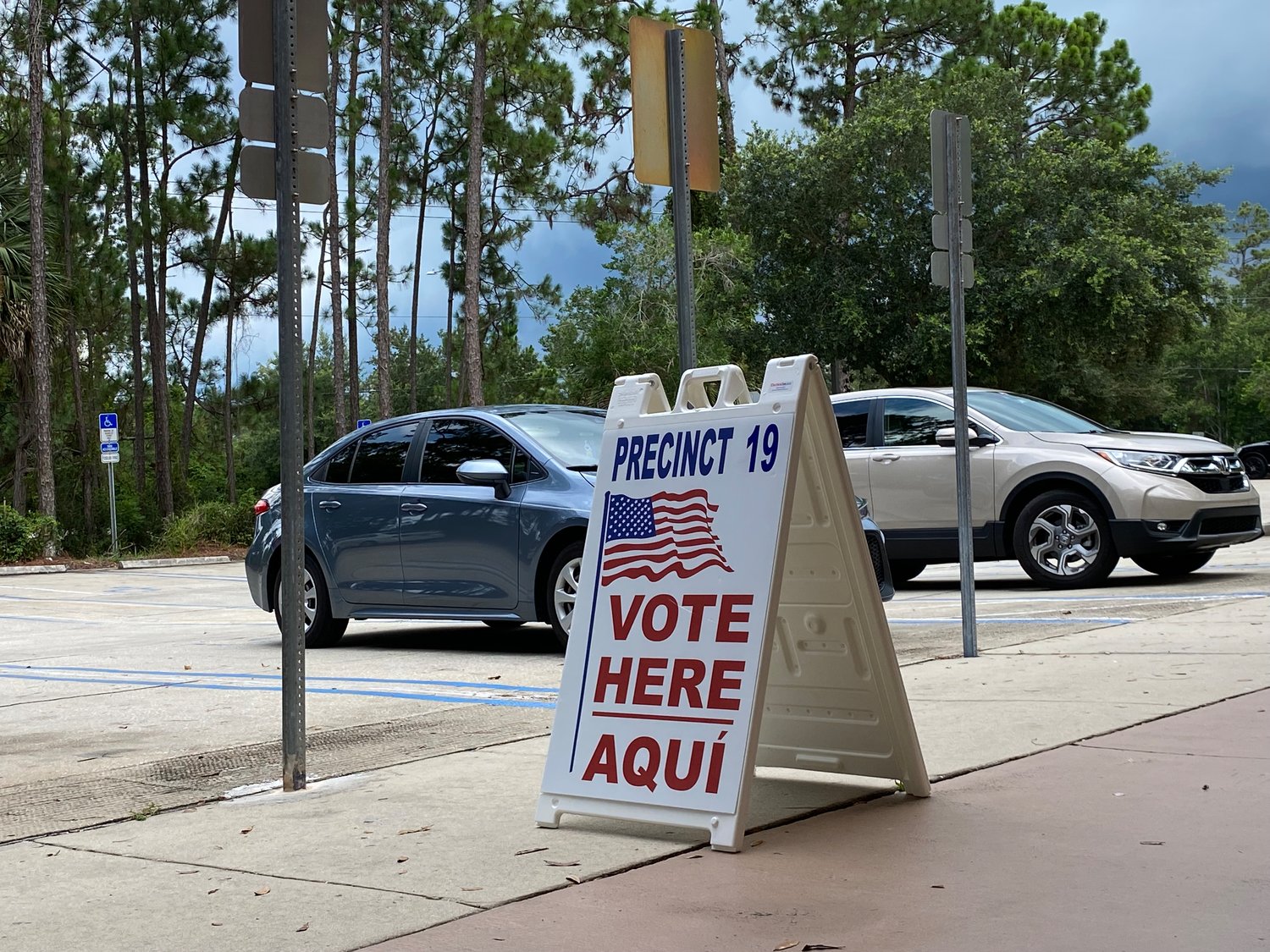 UPDATE, 8/14 1:36 pm: Video of one portion of the dispute between Mullins and Hansen shows, primarily, a verbal debate about Mullins' right to stand in front of Hansen's tent. Toward the end of the video, Hansen mentions potentially suing 17 year-old Jaiden Chavez, who was filming. It's not know exactly what happened outside the time this video was shot beyond what witnesses have described.

Joe Mullins has issued the following statement in response to the incident: "I know how Linda Hansen can be. When I got to the other side of library I walked over to that side and saw them arguing and heard her tell him to get off the property. That's when I walked up." He went on to claim that he was stopping Hansen from potentially attacking Chavez.

PALM COAST, Fla. - The first day of early voting was smooth and harmonious for the most part. There was, however, one dispute at Palm Coast's Flagler County Public Library which quickly ballooned into mass rumor and intrigue through Flagler's political community: a dispute between incumbent County Commission candidate Joe Mullins, and Linda Hansen, Republican activist and wife of fellow incumbent candidate Greg Hansen.

Multiple witnesses corroborate the story of the beginning of the dispute: Hansen was manning a tent which bore the signs of several Republican candidates. Ron DeSantis was among them, as well Michael Waltz, Ashley Moody, and Travis Hutson. Multiple local candidates were represented including Hansen's husband. But no Joe Mullins signs were posted.

Mullins reportedly came over to Linda's tent at some point in the morning requesting that his sign be placed amongst the others. Hansen argued that since Mullins was not a member of the particular Republican club that the tent represented, he could not join. A verbal altercation ensued and witnesses say Mullins raised a hand next to Hansen, but most all agree it was not a show of potential violence.

"I explained why he couldn't put his signs up and he spun up very quickly and got very threatening," Hansen said of Mullins. "I said, 'please step away from the tent', and he said, 'I have every right to stand here'."

Mullins also commented on the incident, telling AskFlagler that it was a brief verbal dispute over the placement of his signs. This was agreed upon by most, give or take a few additional details.

Palm Coast City Council candidate Sims Jones was sitting next to the altercation in a tent set up for the local Democrats' preferred candidates. He said Mullins' hand-raise wasn't a show of physical aggression, but it still put him on-edge. "His hand went back, and if his hand would've come forward, I was gonna jump all over him," Jones said. "He didn't, but he acted like he was gonna hit her." It was probable, Jones then added, that Mullins simply raised his hand in exasperation.

Also a point of contention was 16 year-old Republican activist Jaiden Chavez, who's worked for Mullins' campaign and who was present at the time of the altercation. Chavez filmed the interaction, in a video which has not been made public as of Saturday afternoon. Hansen and him argued over the legality and/or ethics of video taping individuals without their consent. It is legal to film with one-party consent in public places, as Chavez contested, but the manners of it are up for debate.

Mullins' Republican primary challenger Leann Pennington called the Flagler Sheriff's Office at some point during the dispute, prompting a timely response. A report was filed but no charges were pressed. Local Republican leader Bob Updegrave also responded to defuse the situation, mostly calming the flaring tempers for the time being.

Aside from the incident between Hansen and Mullins, things were said to be going peacefully and without conflict. A show of bipartisanship had just taken place earlier in the day when Jones, a pastor, led members of each party in a prayer for unity and harmony.