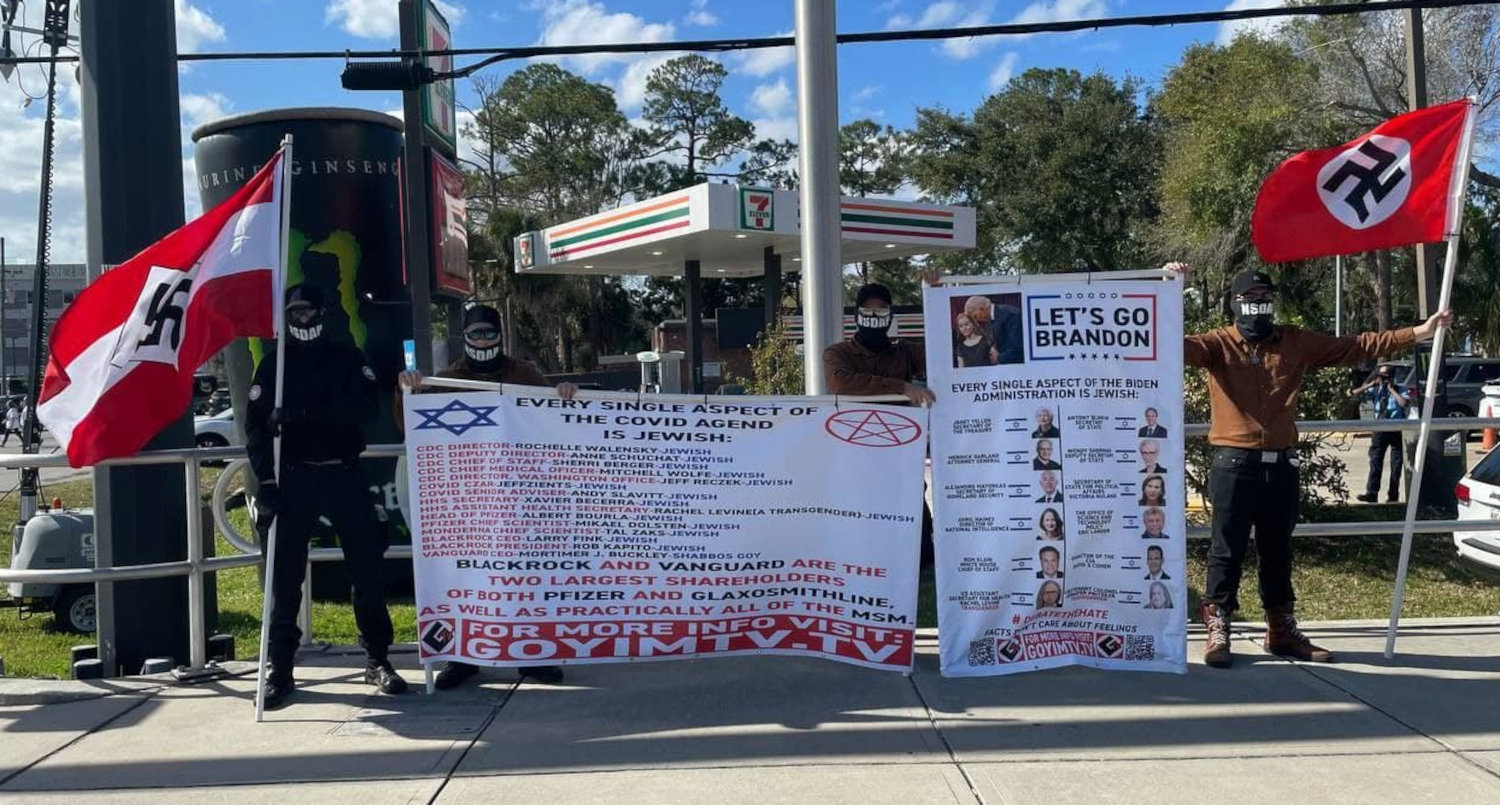 Members of the Goyim Defense League, a group known for its antisemitic views, holding signs and flying swastikas during the Daytona 500 near the intersection of International Speedway Boulevard and Fentress Boulevard. The group's signs are similar to flyers found in Florida, Maryland, Texas, Virginia, California, and Colorado. Their presence in Daytona was confirmed by the Daytona Beach Police Department.
Anonymous / News Daytona Beach
Posted Tuesday, February 22, 2022 1:56 pm
Sean Mooney

Ormond Beach, FL - Residents across multiple states have been finding antisemitic materials at their homes while the group supposedly behind their distribution was seen in Daytona Beach during the Daytona 500.

In the Halifax River area of Ormond, flyers saying “Every single aspect of the COVID agenda is Jewish” were found in a number of driveways. The flyers, according to a report from the Daytona Beach-News Journal, identified numerous public officials as being Jewish, including CDC director Rochelle Walensky, and the CEOs of Pfizer and Moderna, Albert Bourla and Stéphane Bancel, respectively.

Another set of flyers also featured the slogan “Let’s Go Brandon,” which references a misheard phrase that turned into a rallying call among supporters of former President Donald Trump. The flyers also referenced a website known as GoyimTV, which serves as a content sharing platform for the Goyim Defence League (GDL). The GDL—which derives its name from the Yiddish word “Goy,” meaning someone not of the Jewish faith— is described as a network of individuals connected by antisemitic views.

On Sunday (Feb. 20) during the Daytona 500, demonstrators with the GDL were seen holding swastika flags just outside the speedway. Their presence was confirmed to News Daytona Beach by the Daytona Beach Police Department. In a photo submitted to our organization by an anonymous source, members of GDL, some clad in military gear, can be seen holding signs similar to the flyers found in Ormond Beach.

DBPD Spokesperson Messod Bendayan said the department was aware of their presence, but the group was rather small and no reports were filed.

Similar flyers by the GDL have also popped up in other states around the nation. A report from Fox 5 in Washington D.C. says police in Maryland on Saturday (Feb. 19) received reports of residents discovering flyers with antisemitic and political propaganda. Each flyer was placed in plastic bags weighed down with corn, similar to those found in Ormond. Just a stone’s throw from Maryland, residents in Fairfax County, Virginia also found antisemitic flyers on their properties on Sunday.

Residents in Garland and Colleyville, Texas additionally reported finding antisemitic and white supremacist materials at homes in both cities. In a tweet on Sunday, the Colleyville Police Department said they were in contact with the FBI and planned to investigate the incident as a hate crime. Other flyers were reported in California and Colorado.

We are aware of anti-Semitic and white separatist materials distributed in clear sandwich bags to driveways around the city overnight. We have been in contact with the FBI and are investigating as a Hate Crime. Info or video please call non-emergency number to report 817-743-4522