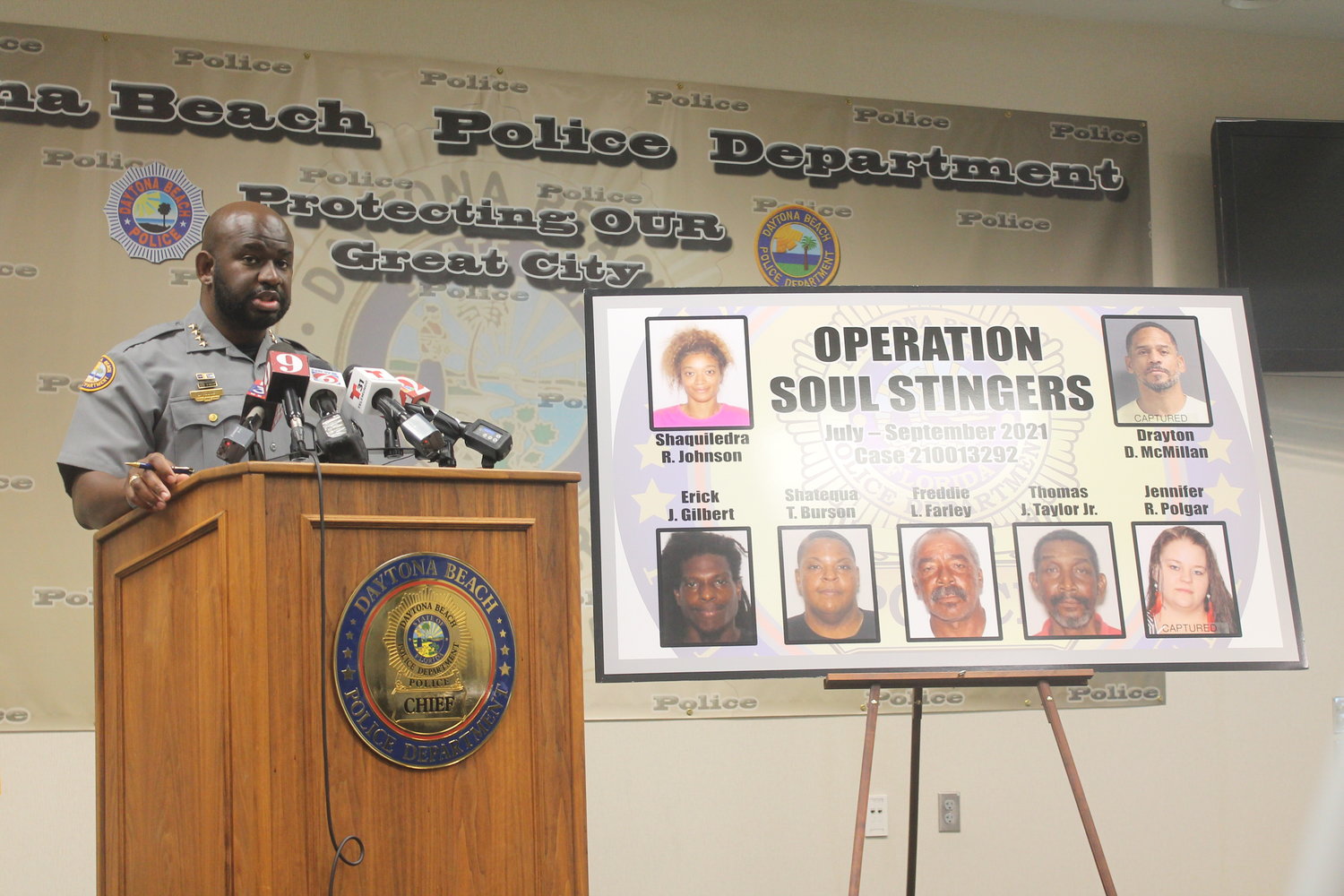 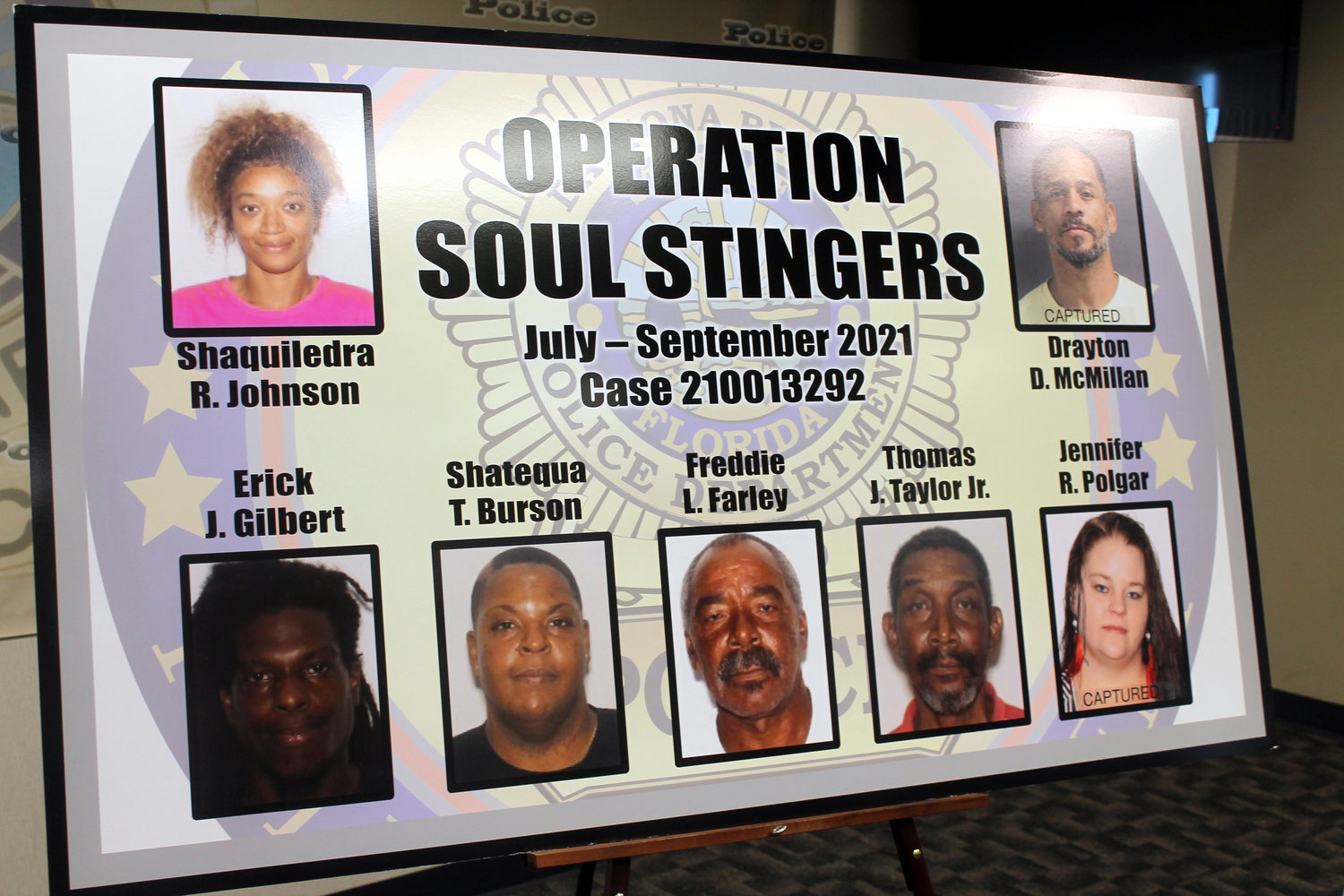 The defendants identified as part of Operation Soul Stingers, which derives its name from the types of cars bought by the defendants
Sean Mooney/News Daytona Beach
Previous Next
Posted Friday, January 21, 2022 11:10 am

“To take advantage of anyone like this is reprehensible, but especially those who are elderly,””
Jakari Young, Daytona Beach Police Chief
Sean Mooney

Daytona Beach, FL - This group of seven is facing various fraud-related charges after using the identities of elderly people—both dead and living—to spend $350,000 on vehicles.

The Daytona Beach Police Department (DBPD) says other state law enforcement agencies assisted in what’s known as “Operation Soul Stingers,” which derives its name from the types of vehicles that were purchased using fraudulent information. So far, five of the seven defendants remain at large while two are in custody.

One of those defendants, Drayton McMillan—who is considered one of the masterminds—was already in the Volusia County Jail for violating his probation for grand theft and forgery in a separate case.

Everything kicked off in July 2021 when an elderly man in Delray Beach learned that someone used his identity to purchase a vehicle at Daytona Kia—where a majority of the fraudulent vehicle purchases were made. He reported it to the Delray Police Department, who in turn contacted the DBPD. Police found another round of fraudulent vehicle purchases from the same dealership as the DBPD’s Financial Crimes Unit verified the information from Delray Beach.

Investigators say the group—led by McMillan and Shaquiledra Johnson—stole social security numbers, driver’s license numbers, and other types of personal information from elderly people, both living and dead. Six of the victims live around the South Florida area. Another victim died in 2018, and another in 2019. A ninth victim was said to be living in Welaka in Putnam County.

Daytona Beach Police Chief Jakari Young said the group was able to steal the information after accessing a state database. Once they were in the database, they managed to change the addresses of the elderly victims to apply them to fake IDs they had made. With that information, the group purchased seven vehicles, totaling over $350,000 and a majority of them Kia’s—thus the name “Soul Stinger,” as two of the models purchased by the group were the Kia Soul and Stinger. In total, three Stingers, two Souls, a Forte, and a K5 were purchased.

“To take advantage of anyone like this is reprehensible, but especially those who are elderly,” said Young.

Besides the fraudulent car purchases—which they were able to make by financing the cars through the dealership—the group also used the stolen information to open credit lines and apply for different types of loans, including COVID-19 recovery loans from the Small Business Administration. Signatures of the victims were also forged on the vehicle contracts, either at the dealership or when the vehicles were delivered to the defendants.

Over 650 fraudulent documents were found in McMillan’s cellphone following his arrest in DeLand back in September, while he was driving one of the stolen Stingers. The documents were seized as evidence three weeks after McMillan’s arrest once detectives were able to secure a search warrant.

Through what they found on McMillan’s cell, investigators were able to locate four additional fraud victims. In those cases, detectives discovered phone purchases, fraudulent checks, and applications for credit cards and unemployment benefits all made in the victims’ names. One of the victims in the vehicle fraud investigation was also victimized that way.

Additional charges are pending in this investigation, as detectives continue to sort through the information on McMillan’s phone. According to FCU investigators, there could be over 70 other victims, all mostly based in South Florida. The defendants and their charges can be found below. So far, McMillan and Jennifer Polgar are the only two defendants in custody.