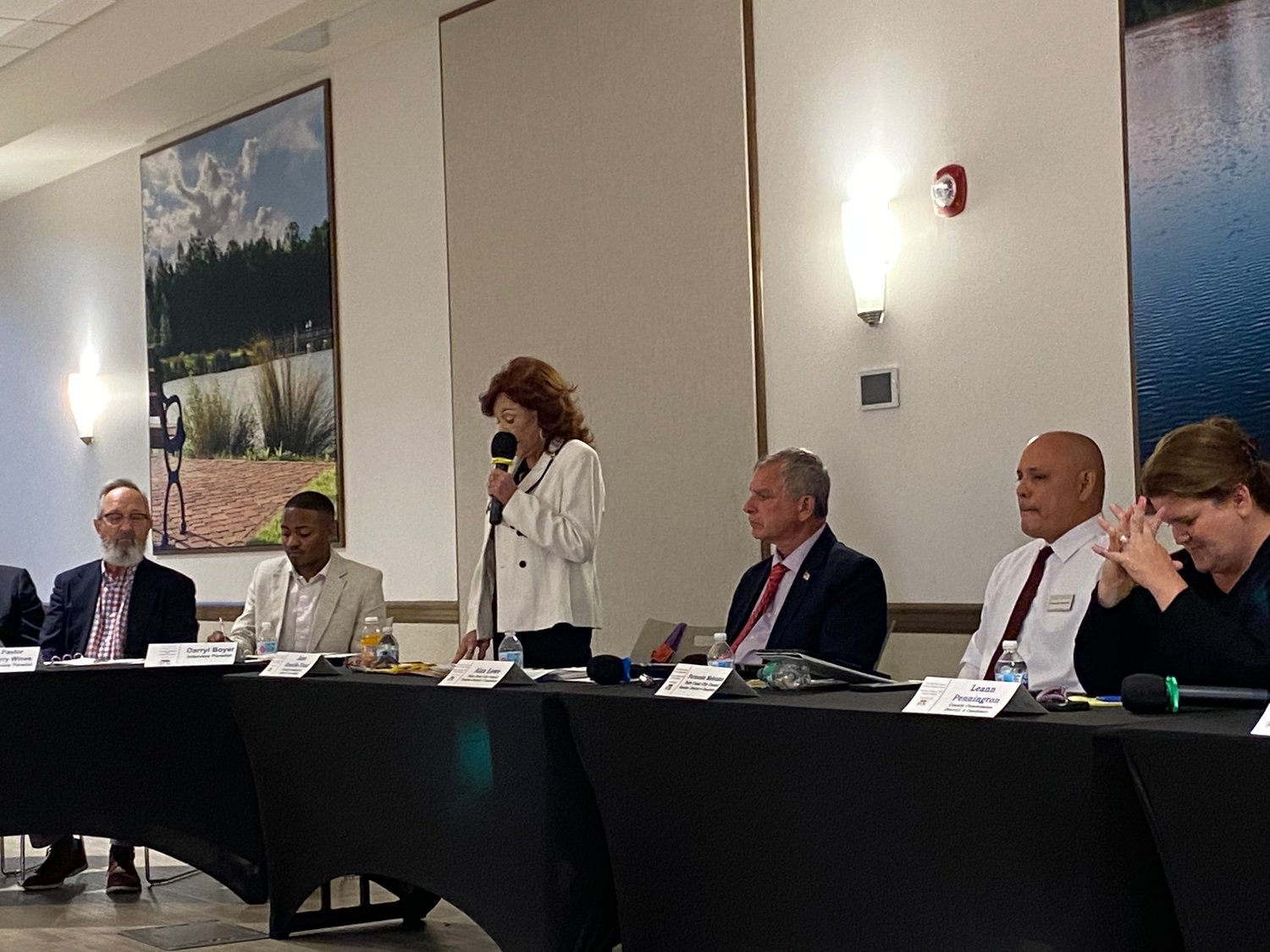 Flagler County Sheriff Rick Staly issued a statement on Friday rebuking Jane Gentile-Youd, a candidate for the County Commission, for her comments during a Tiger Bay Club forum about law enforcement. Asked for her stance on the Sheriff's Office's budget, Gentile-Youd advocated for a degree of budget cuts.

Specifically, Gentile-Youd pointed to a perceived lack of funding for the county fire department as being indicative of the need to show restraint with Staly's budget. She advocated for the improvement of fire department facilities and for some belt-tightening at the Sheriff's Office as opposed to a budget increase.

“I think it’s a disgrace,” Gentile-Youd said of the state of the funding comparison between the two departments. She suggested the Sheriff sell some or all of the department's boats in order to fund the deputy pay raises that Staly has recently sought. Staly himself was seated in the crowd, looking mostly stoic during Gentile-Youd's critique of his department.

It took eight whole days for Staly's response to drop, and it marked his first public statement about a candidate's merit in this election cycle. "The 'defund the police' candidate is NPA Jane Gentile-Youd," Staly said, playing off the county's overwhelming support of local law enforcement.

"She has no clue how law enforcement operates and is listening to the wrong people," the Sheriff continued. He relayed experiences having met with Gentile-Youd and answered her questions, and accused the candidate of having listened to 'failed law enforcement officials', as well as county staff whose opinions he calls into question.

Staly's full remarks are displayed below (click for enlarged image). 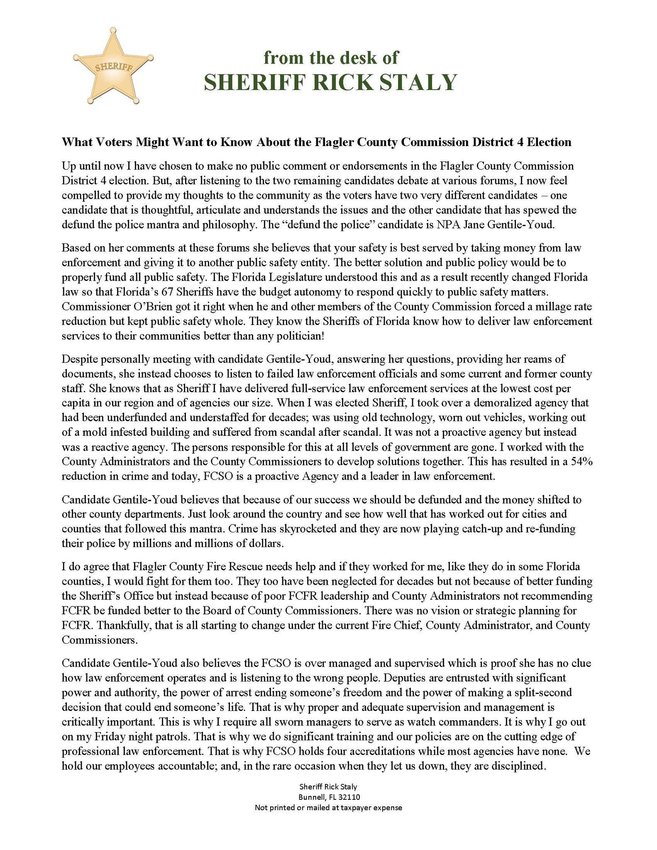 "My replies at the candidate forums, and not at any of the official budget hearings  were as a FISCAL CONSERVATIVE and wanting to be a GUARDIAN OF OUR TAX DOLLARS . When asked I responded and spoke of the Sheriff's use of his funds to pay over 6 of his staff an average of $100,000  and 18 of his staff an average of $90,200 each ; buying expensive( Boston Whaler)  boats  and the Sheriff's crying about not having funds to pay deputies decent salaries. , Both forums were  AFTER the final budget hearings.  His allegations that I want us to return to the pre Staly days of high crime are untruthful and scandalous at best .I offer proof of his intentions to slander me as as Candidate as follows:
"FACTS:  I, Jane Gentile-Youd, candidate for County Commission,  NEVER once commented or mentioned the Sheriff's budget at the County Budget workshop on September 12, nor at the Final Budget Hearing on September 19th. The board minutes of both meetings reflect my requests to cut ONLY the county attorney's budget down from the $915,000, to raise the rent from $8,000 a year to $50,000 a year for Captain's Bar-B-Que , in support of finding $350,000  funding for  2 additional paramedic pilots for the Fire Rescue helicopter o be available 24/7  because we have no trauma center in Flagler County and we only have the helicopter available  1 shift  a day,  in addition  I suggested  cutting $90,000 from trips and memberships of the BOCC.
"FACTS:    TWO COMMISSIONERS NOT JANE GENTILE -YOUD SPOKE IN OPPOSITION TO THE SHERIFF'S DEMAND FOR $700,000 ABOVE the county's PROPOSED BUDGE of $35,922,750.    At the first Budget Public Hearing September 7th Commissioner Andy Dance  stated: " There was a record amount of new funding going to the Sheriff this year and that it is the Sheriff's responsibility to set the salaries as he had the opportunity and ability to pay his people first.  " The system between the Sheriff's operations and the county was broken and that he wants to fix the process moving forward".  Commissioner Dance further stated taking money from reserves was not the answer.  Commissioner Dave Sullivan also spoke in opposition to giving the Sheriff the additional $700,000  he wanted stating that would mean less money to run the county.    The Sheriff's final county budge  granted is $700,000 above the county's original proposed $35,972.750, which he finally was given after he  threatened to sue the county if they did not agree HIS.TOTAL BUDGET:   $ 36,622,750  .  Both the aforementioned commissioners  were concerned about cutting $600,000 funding from our much needed transportation budget among other cuts in order to satisfy the Sheriff's demands for an additional $700,000.
"ADDITIONAL COSTS OUT OF OUR POCKETS not disclosed by the Sheriff in his untruthful biased 'unofficial endorsement of my opponent"   include:
** The entire cost of the new Sheriff building between $21,000,000 and $22,000,000 is being paid from our General Funds which funds also pay for the maintenance of all buildings used by the Sheriff including the new one in Palm Coast. The General Funds ( our tax dollars reserved for all other county departments) also pays for the maintenance of his boats, cars and all the buildings he uses (which are all owned by us).   He failed to disclose that he purchased a new Boston Whaler boat with 2 expensive outboard motors last year as well as got an extra $400,000 from our General Budget for a new command center he 'claims'  he needs.  He failed to disclose that he gets grant funds and is able to keep a portion of all the fines he collects.
** If our deputies are leaving the county because they are underpaid it i  because as Commissioner Dance stated " it is the Sheriff's responsibility, not the county to set salaries of his staff".

"  ** Why doesn't  the Sheriff have enough money to pay his deputies a decent starting salary when in 2016 the Sheriff budget was $18,700,000 and today it is $36,722,750.  That is a 100% increase in 5 years.  IS THIS AN EXAMPLE OF BEING FISCALLY CONSERVATIVE TO HAVE DOUBLE THE FUNDING IN 5 YEARS AND NOT ENOUGH TO PAY DEPUTIES WHAT THEY DESERVE?   Does 'Fiscally Conservative" apply to everyone except the Sheriff in Flagler County?
** The Sheriff was the only constitutional officer who refused to meet with county staff, beginning in January 2022 to discuss his budgetary wishes ; he just threatened to SUE THE COUNTY IF THEY DIDN'T GIVE HIM WHAT HE WANTS.

" The Sheriff's October 14 " WHAT VOTERS MIGHT WANT TO KNOW ABOUT THE FLAGLER COUNTY COMMISSION DISTRICT 4 ELECTION",in addition to being untruthful,  I ALLEGE is in violation of Florida Statute 104.31 (1) (a)  which prohibits such behavior from an elected official from endorsing or interfering or swaying an election is a misdemeanor of the first degree punishable for up to one year in jail. I ALLEGE F.S. 110.233 ( 2) and (3) (b) also prohibit such behavior.   His allegation of my wanting to DEFUND his department is knowingly totally false and unsubstantiated in public records. Every one of my statements were in answer to questions at forums after the final budget  hearings were over:
"In closing, the Sheriff's letter PUTTING WORDS INTO MY MOUTH is a scandalous  document in violation of 2 current state statutes , above,and which public records can AND PROVE that I NEVER  made any attempt whatsoever to cut or defund his budget.  Again, both meetings, at the September 12 Budget Workshop nor at the Final Budget Hearing on September 19th did I EVER EVEN UTTER THE WORD 'SHERIFF'.    I AM A PROUD FISCALLY CONSERVATIVE NPA candidate  DESIRING TO GUARD OUR TAX DOLLARS FROM  ABUSE BUT I NEVER COMMENTED ONE WORD ABOUT THE SHERIFF'S BUDGET DEMANDS AT ANY BUDGET PUBLIC HEARING IN WHICH DECISIONS WERE MADE.
"I wish to thank the hard working staff of the Sheriff's department, many of whom have been dedicating many years of their lives before the current Sheriff took office and will hopefully be with us after he is gone from office.  I have supported the efforts to vacate the old smelly hospital and spoke against the original purchase back in January, 2013.  It takes a lot of guts , especially in today's world where guns are available to everyone combined with so much disrespect against law enforcement personnel , to get up in the morning and never know for sure you will be going home at night.  It is a shame that so much money is being spent on luxurious buildings, fancy boats, unnecessary command centers instead of buckling in the belt and paying those out in the streets what they are worth.  God Bless you deputies out there in this cruel world protecting us even though many of you are not paid what you are worth.  Thank you for your service.  My retort against the Sheriff's scandalous untruths has nothing to do with my respect for his staff.  An added final note: Sheriff says he 'encourages voters to do their research on my opponent" however  I am unable to find anything she has done."