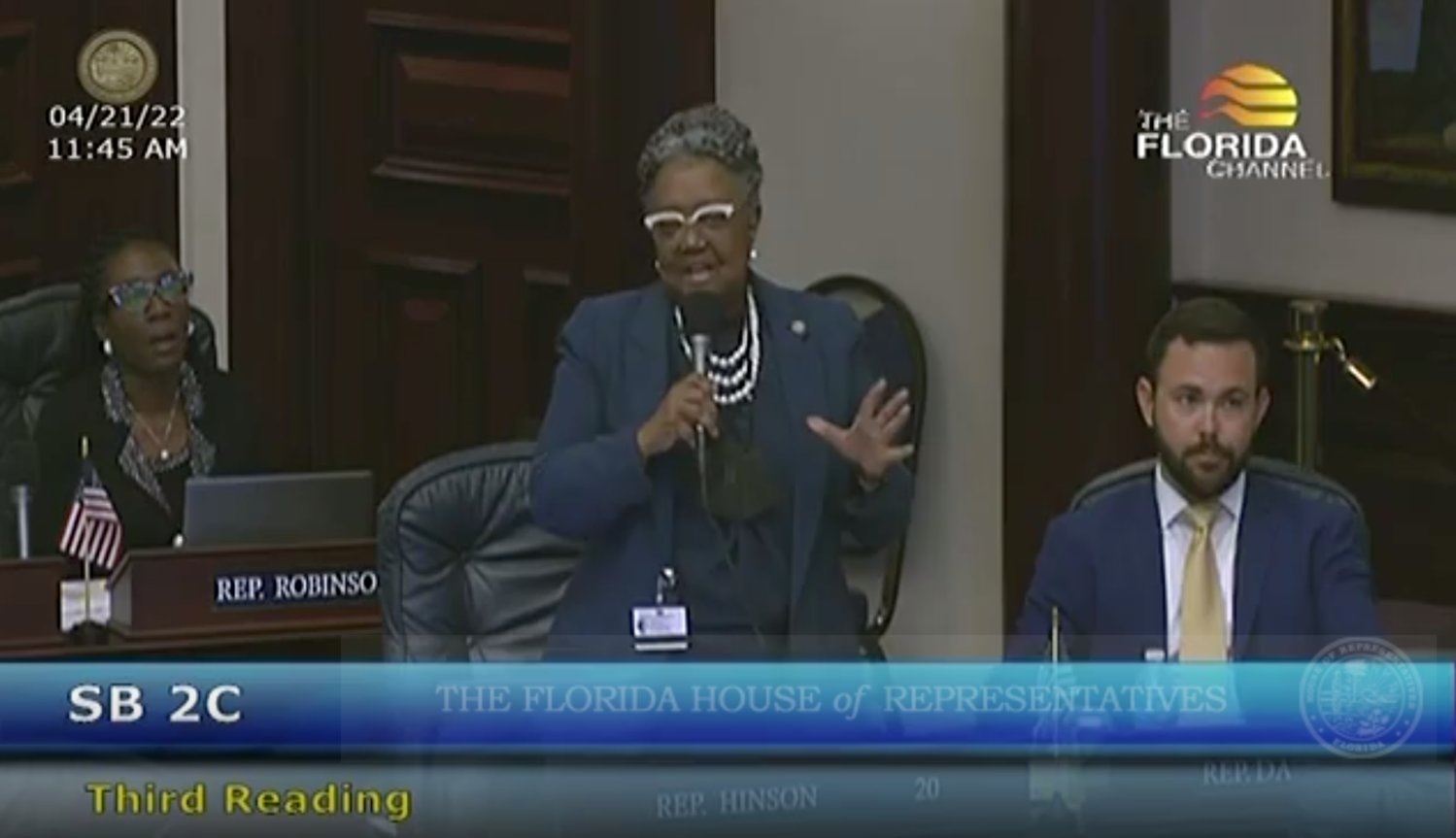 State Representative Yvonne Hayes Hinson (D - Gainesville) attempted to convince legislators to reject the Governor's redistricting map. She was unsuccessful, and her mic was cut off.
The Florida Channel 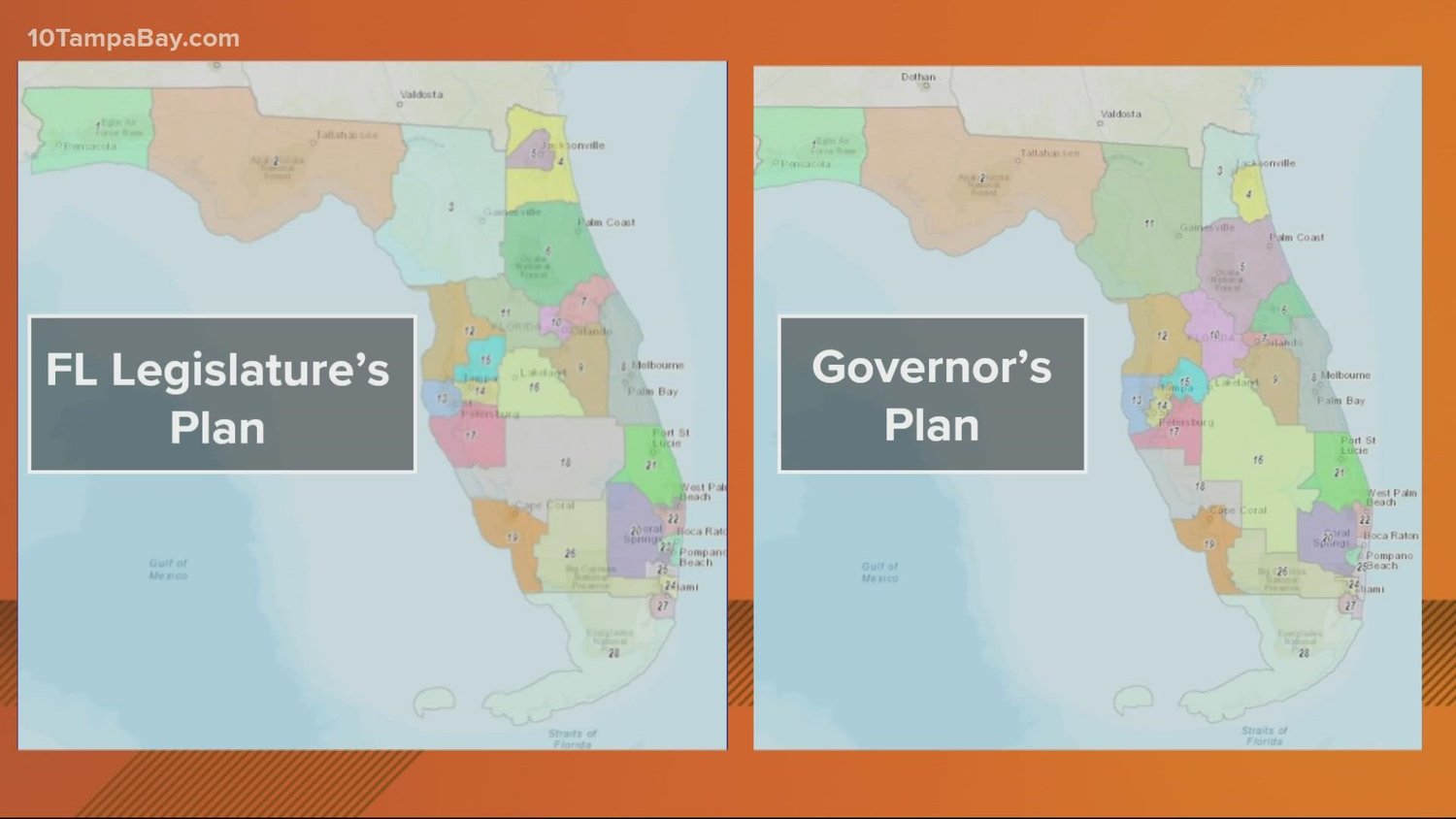 TALLAHASSEE – Both of Governor Ron DeSantis’s foremost policy objectives were passed by the state legislature Thursday: the dissolution of Walt Disney World’s special district status and the approval of his congressional own redistricting map. Both bills now await the Governor’s signature.

The Disney bill passed first. It will end a provision established in 1967, granting Disney the ability to essentially self-govern its network of amusement parks in Orange and Osceola counties. The move was, in the words of GOP legislators leading up to the decision, tantamount to retaliation for Disney’s disapproval of the Parental Rights in Education bill (AKA ‘Don’t Say Gay’). In effect, the local county governments will inherit Disney World’s assets and liabilities. This particular aspect of the bill stands to increase taxes on residents to the tune of thousands to pay off debt held by the park network.

The Reedy Creek seizure will no doubt face challenges in court between now and its effective date of June 1st, 2023. There are First Amendment implications in the legislature’s proclaimed reasoning for Reedy Creek’s dissolution, stemming from the government imposing sanctions on a private corporation in response to an exercise of free speech. And plausible deniability on the reasoning may be an issue for the state, as multiple GOP officials have declared it in no uncertain terms:

Yesterday was the 2nd meeting in a week w/fellow legislators to discuss a repeal of the 1967 Reedy Creek Improvement Act, which allows Disney to act as its own government. If Disney wants to embrace woke ideology, it seems fitting that they should be regulated by Orange County. pic.twitter.com/6sj29Gj6Wz

Ron Desantis announces Florida will debate removing Disney’s special protections under Florida law in the wake of Woke Disney attacks on Florida laws. This is how you win because, guess what, they ain’t moving Disney World somewhere else. Boom. pic.twitter.com/XGihd3qRRm

In Governor DeSantis’s pursuit of issues dubbed ‘culture wars’, he usually has the backing of his party’s legislative majority, making the true battleground the courts. However, on the issue of a new congressional districting map, DeSantis had to have it out with the GOP for a bit first.

The Republican legislators carried out their delegated responsibility last month to turn in a redistricted map to the Governor in light of the 2020 census. DeSantis promised them it would be dead on arrival if it made it to his desk, and he would later follow through on that promise. The Governor had drawn his own map which would stand to break up multiple majority-black congressional districts. The resistance was immediate.

Not only did constituents from the districts object to DeSantis’s plan, but the his efforts to draw a map in the first place came under fire as well. From the beginning, if a map drawn by a sitting Governor was put through the legislature, it would establish a precedence of consolidating additional power to the executive branch from the legislative. The legislators didn’t immediately signal approval, but later announced their intention to put DeSantis’s map to a vote.

As it does break up existing minority-majority districts, DeSantis’s map was criticized by some for being an act of gerrymandering. Named after 19th century Vice President Elbridge Gerry, gerrymandering is the process of manipulating district boundaries with the intent of strengthening one party’s representation in a government body. Gerrymandering is illegal, but difficult to prove beyond reasonable doubt. DeSantis made counter-accusations that the districts had been gerrymandered before, and he was merely correcting them.

A comparison of the GOP legislature’s map versus Governor DeSantis’s.

A sit-in was held on the State House floor, in which black legislators demonstrated to attempt to disrupt the vote. A t-shirt bearing the phrase ‘Stop the Black Attack’ was unfurled by Representative Tray McCurdy of Orlando, who then sat down on the state seal.

Representative Yvonne Hayes Hinson of Gainesville attempted plead her case during the allotted debate period. “We are abdicating our constitutional responsibility and subverting our power to. He further complained that this inclination to spend other people’s -” Her microphone was then silenced. The debate period’s time had expired.

“The ball is in your court, Lord,” said Representative Dotie Joseph of Miami after leading a group prayer. “It is up to you now.”

The redistricting map was passed. It too will head to Governor DeSantis’s desk to be signed into law, but as with the Reedy Creek bill it was also face definite courtroom challenges where its constitutionality will be debated. DeSantis himself attempted to get a pre-emptive endorsement of the map from the State Supreme Court before the special legislative session began. The Court declined.