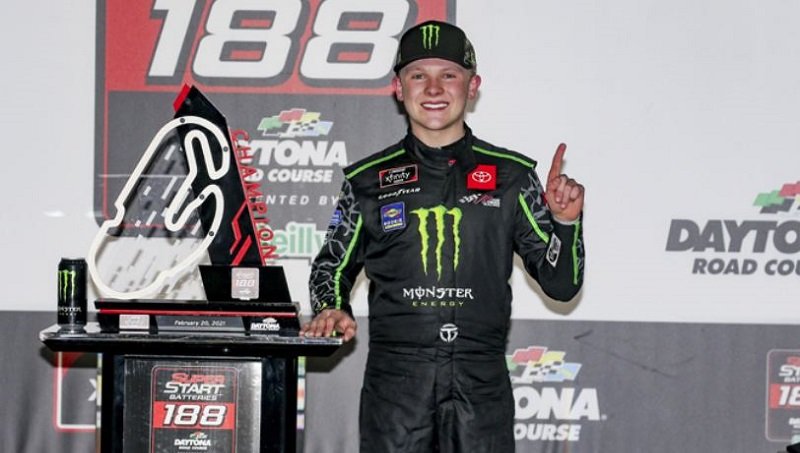 Gibbs took the lead on a restart in double overtime and held off the field by a comfortable 1.726-seconds at the finish line, dropping to his knees to reflect after climbing out of his No. 54 Joe Gibbs Racing Toyota – a car owned by his grandfather, NASCAR Hall of Famer Joe Gibbs.

With his win in the Super Start Batteries 188 at DAYTONA Presented by O’Reilly Auto Parts, Gibbs becomes only the sixth driver to win in his first series start – matching a feat achieved by NASCAR Hall of Famer Dale Earnhardt in 1982 and most recently, Kurt Busch, 15 years ago.

By all measures, it was an emotional victory following an intense, exciting race on the 14-turn, 3.61-mile road course. Cindric led the most laps 29 of the 56 – but could not catch Gibbs in the end.

“I just cannot thank everybody right now, really this is like a dream come true for me, it’s just awesome," said an emotional Gibbs, who turned his first ever laps in the car and made his first career pit stop Saturday evening.

"I really didn’t think I had it there," he said of the intense racing at the end. “I fought back and we won."

A victory for Cindric would have been his second in as many races in 2021 and he turned in an inspired drive back to the front to contend for the win. He and A.J. Allmendinger – another road course racing star – collided while running first and second heading to the Stage 1 checkered flag. Allmendinger’s car was badly damaged and he ran laps down the remainder of the race.

Cindric’s No. 22 Team Penske Ford was damaged as well, but the team made repairs and Cindric went to work. He returned to the race after multiple pit stops in 33rd place, but still on the lead lap. His road racing skills and the team’s strategy calls ultimately put him in position to contend for the win.

“Obviously I don’t want to be racing to a stage that aggressively, I’d love to see a replay and hopefully we can avoid something like that because obviously A.J. and I were going to be fighting for a win later," Cindric said.

“I hated having that much damage to our PPG Ford Mustang that early. Just seemed like he was trying to block there, don’t know if he knew I was there or not. Sucks it’s over with and we salvaged a good finish. Congratulations to Ty."

Gibbs grandfather, who owns the team, climbed down from the pit box and stood behind it to watch the final moments of the race. Clearly Ty Gibbs win was an emotional achievement for the entire family.

During a late race pit stop, the teenager Ty was asking his team for peanut butter crackers. An hour later, he was hoisting the biggest trophy of his young career.

“I don’t even know how to feel," Gibbs said. “This is really hard for me to explain. After my uncle [JGR President JD Gibbs] passed away, it’s been hard for me. It’s just a dream come true. I’m just rambling. I’m excited. Mixed emotions for sure. This is just awesome.”

“The family is everything to me, they do so much for me," Gibbs said. “I just can’t thank them enough, this is just amazing; this is a dream come true. It’s all the man above, I’m sorry I’m a wreck I didn’t think this was going to happen at all. This is awesome, I can’t thank everybody enough watching and last week I had a terrible interview. I want to apologize for everybody, I just can’t thank everybody enough. This is just amazing.”

The NASCAR Xfinity Series races next Saturday at Homestead-Miami Speedway in the Contender Boats 250 (4:30 p.m. ET on FS1 MRN and SiriusXM NASCAR Radio).

A limited number of tickets are still available with kids starting at only $10. To be a part of the action, fans can visit www.daytonainternationalspeedway.com or call 1-800-PITSHOP.

All events will be conducted in accordance with enhanced safety protocols and procedures to provide a safe environment for guests, NASCAR competitors, employees and the local community. All guests will be screened before entering the facility and will be required to wear face coverings while maintaining six feet social distancing throughout their visit.