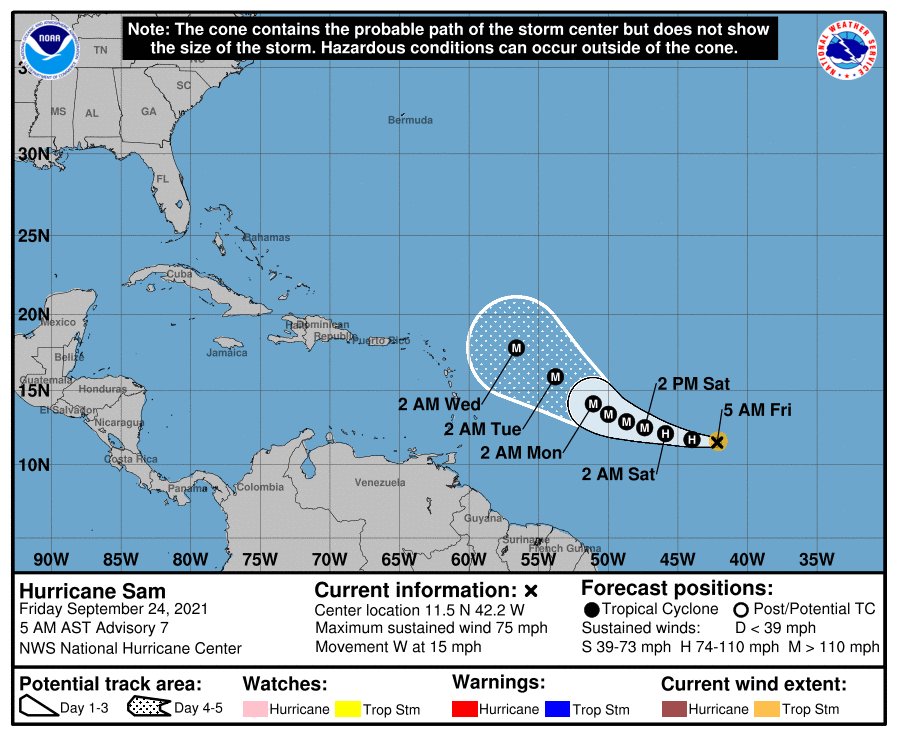 Daytona Beach, FL - Forecasters from the National Hurricane Center (NHC) are monitoring Hurricane Sam as the storm is expected to reach major hurricane strength by this weekend.

As of early Friday morning (September 24), meteorologists say Sam—which has intensified rapidly so far—has a small, well-developed inner core and pronounced curved bands that wrap most of the way around the center of the system. Maximum sustained winds were last measured at 75 mph.

Presently, Sam is moving westward at about 13 knots/15 mph, and this general motion is expected to carry on for the next 24 to 48 hours. After that, the storm is expected to slow down before a turn to the west-northwest. As Sam nears the northern Leeward Islands, the system is forecast to turn northwestward.

According to the NHC, large scale environmental conditions all appear favorable for continued rapid intensification during the next day or so as the hurricane is expected to remain over warm waters and in very low wind shear conditions. After a couple of days, the environment is likely to become a little less ideal, and most of the models show Sam leveling off in strength.

As of Friday no watches or warnings have been put in place. However, while Florida remains out of the cone at the moment, residents should monitor the storm’s progress and have a plan in place just in case.

News Daytona Beach will monitor the storm and pass along updates as they come.