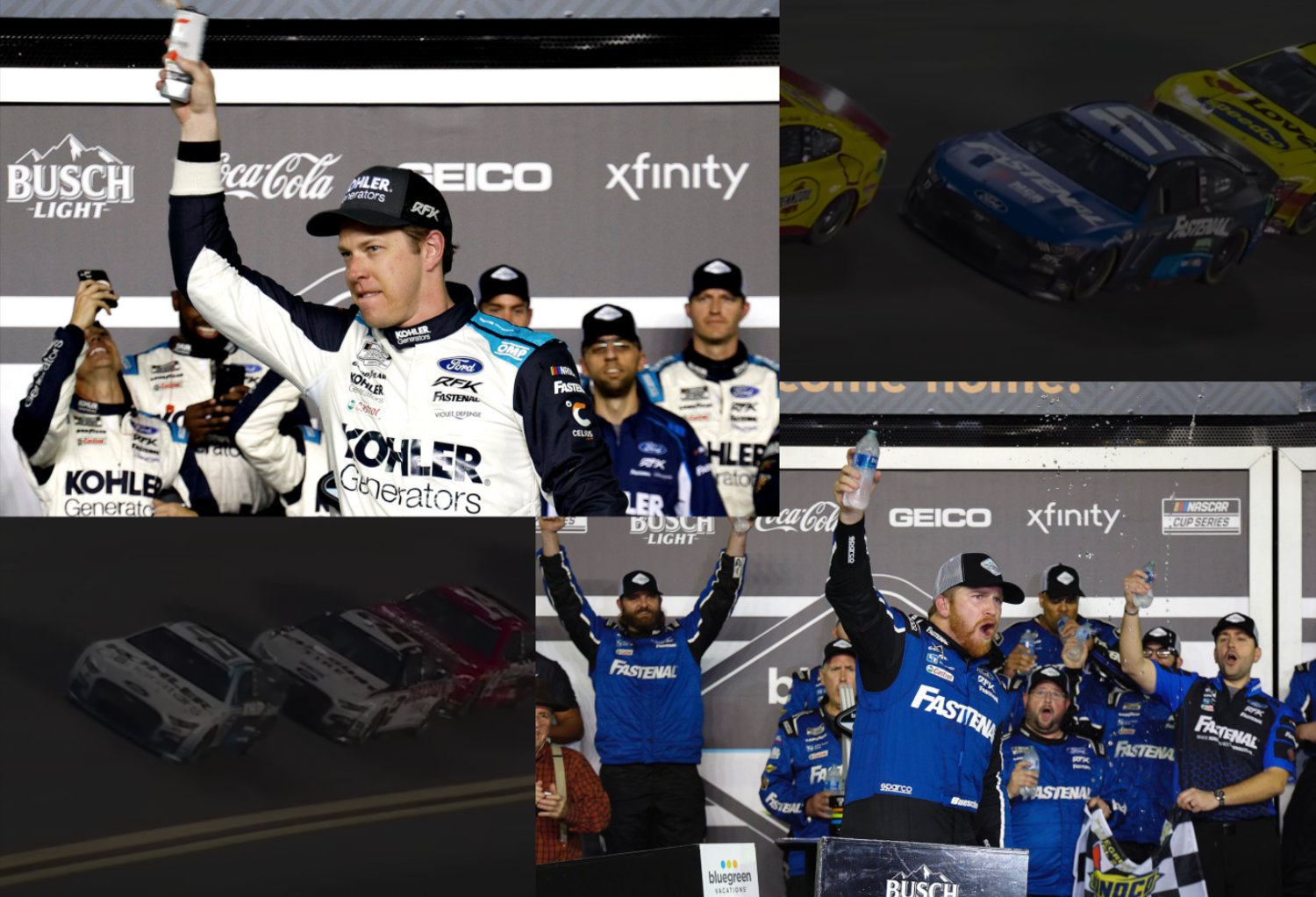 DAYTONA BEACH - Brad Keselowski's time as a team owner is off to a good start, as he and teammate Chris Buescher triumph in the Bluegreen Vacations Duels. Added onto Joey Logano's win in The Clash earlier this month, Ford Performance has now won all three races on the NASCAR season leading up to Sunday's Daytona 500.

Drivers were racing rather conservatively Thursday, not wanting to total their Next Gen cars amidst talks of shortages. The first duel was mostly without incident, coming down to pit strategy more than anything. The Ford pack worked together by taking two tires, while the Chevrolet pack took four, extending the length of their stops and setting them further behind. Kurt Busch was the lone Toyota in the event.

In the closing laps of the race, Ryan Blaney led Keselowski, Chase Briscoe, and Austin Cindric in a single-file line.  Keselowski made his move for the lead with four laps remaining in the 60-lap event, and never gave it up from there.

In addition to the race win, another battle was going on toward the tail of the field. Whoever between Kaz Grala and J.J. Yeley finished higher advanced into the Daytona 500; whoever finished lower did not. Yeley had the spot on lock until the very end, when drafting partner Daniel Hemric hung him out to dry. Grala made the pass on the final lap to give the Floyd Mayweather-owned team The Money Team its first Daytona 500 berth.

"I gotta give credit to the other Fords, we worked really well together," Keselowski said after his win. "Ryan Blaney, Chase Briscoe, Austin Cindric, we drove away and got ourselves in position where we could control the finish of this race. I'm happy to see all those Fords up front."

In the second duel, the Toyota cars enjoyed the advantage of running together, quickly forming an effective drafting coalition. They did, however, lose a teammate when Denny Hamlin lost control and spun out at the entrance to pit road.

By the end of the race, it came down to another Ford-driven finish. Joey Logano led Chris Buescher, Michael McDowell, and Harrison Burton in the closing laps. Buescher moved low to make a race-winning move on Logano, but the two made contact when Logano came down to block. Logano was sent head-on into the outside wall, and was hit by Burton almost immediately thereafter.

The caution flew seconds later, with Buescher and McDowell neck-and-neck. Buescher ended up barely ahead, and the call secured a race sweep for RFK Racing.

"Hats off to everybody back at the shop, I know it's been a hectic offseason for everybody in our sport," Buescher said after his win. "We've had a lot of changes going on, and it's cool to see it play out."  His comments refer to the engineering challenges involved with implementing the new Next Gen racecar, which gave teams work to do right up until the season's beginning.

Another battle one Daytona 500 spot took place, with Greg Biffle and Timmy Hill both in contention. Biffle, a returning veteran who'd been retired since 2016, outran Hill and nabbed a spot in his 15th Daytona 500.

The evening sweep by RFK is an unexpectedly strong showing out of a team who many thought may have growing pains this season. Roush Fenway Racing had been winless in NASCAR since 2017. When Brad Keselowski invested into it in an ownership role, the newly formed RFK Racing was put in a make-or-break situation for the 2022 season. In Thursday's Bluegreen Vacations Duels, they're starting to lean towards making it.

Dierks Bentley to Perform Prior to Daytona 500