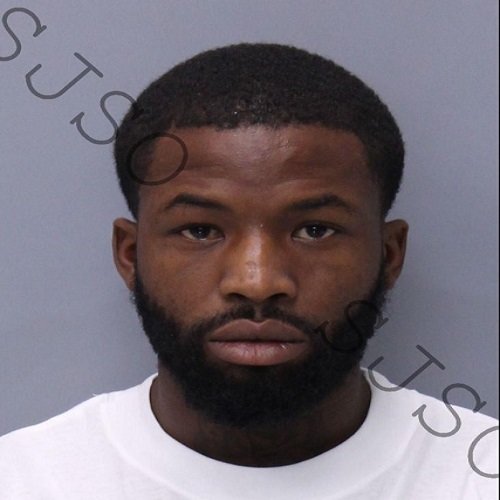 Deputies followed Ivory's vehicle which turned into a dead-end on Colbert Lane. Stop sticks were deployed but Ivory was able to evade them. Deputies say his car was traveling at about 50 miles per hour coming out of the street and swerved toward a K-9 deputy's vehicle, almost ramming it. That deputy was not injured.

Ivory's vehicle was re-located and deputies followed at a safe distance calling out the direction of travel until Flagler County Fire Flight took over. Stop sticks were deployed at multiple locations but Ivory was driving in an erratic manner and units were unsuccessful.

Pursuit was authorized when it was determined that there was probable cause for aggravated assault on a law enforcement officer. Deputies pursued the vehicle northbound on I-95 when it exited on U.S. 1 in St. Johns County. While pursuing southbound on US-1, the vehicle reached speeds of upwards to 100 plus miles per hour. The St. Johns County Sheriff’s Office joined the pursuit as Ivory's vehicle continued to run
red lights and run other vehicles off the roadway.

SJCSO also attempted stop sticks, finally succeeding when Ivory crashed on U.S. 1. Ivory got out of the car and started running to an occupied vehicle, which he tried to carjack. He got the victim out of the vehicle but Sheriff's deputies blocked that vehicle from moving. Ivory was then taken into custody without further incident.

Information shows that Ivory is on inmate release status for aggravated fleeing and eluding. His license was revoked in November 2019. In October 2014, he was found guilty of fleeing officer with serious bodily injury/death and crash.

Ivory is charged by FCSO with Aggravated Flee/elude, Aggravated Assault on a Law Enforcement Officer, and Driving While License Revoked. SJCSO has multiple felony charges against him to include Aggravated Fleeing and Eluding with Serious Bodily Injury/Death/Crash, Attempted Carjacking, Trafficking in Heroin, and more.