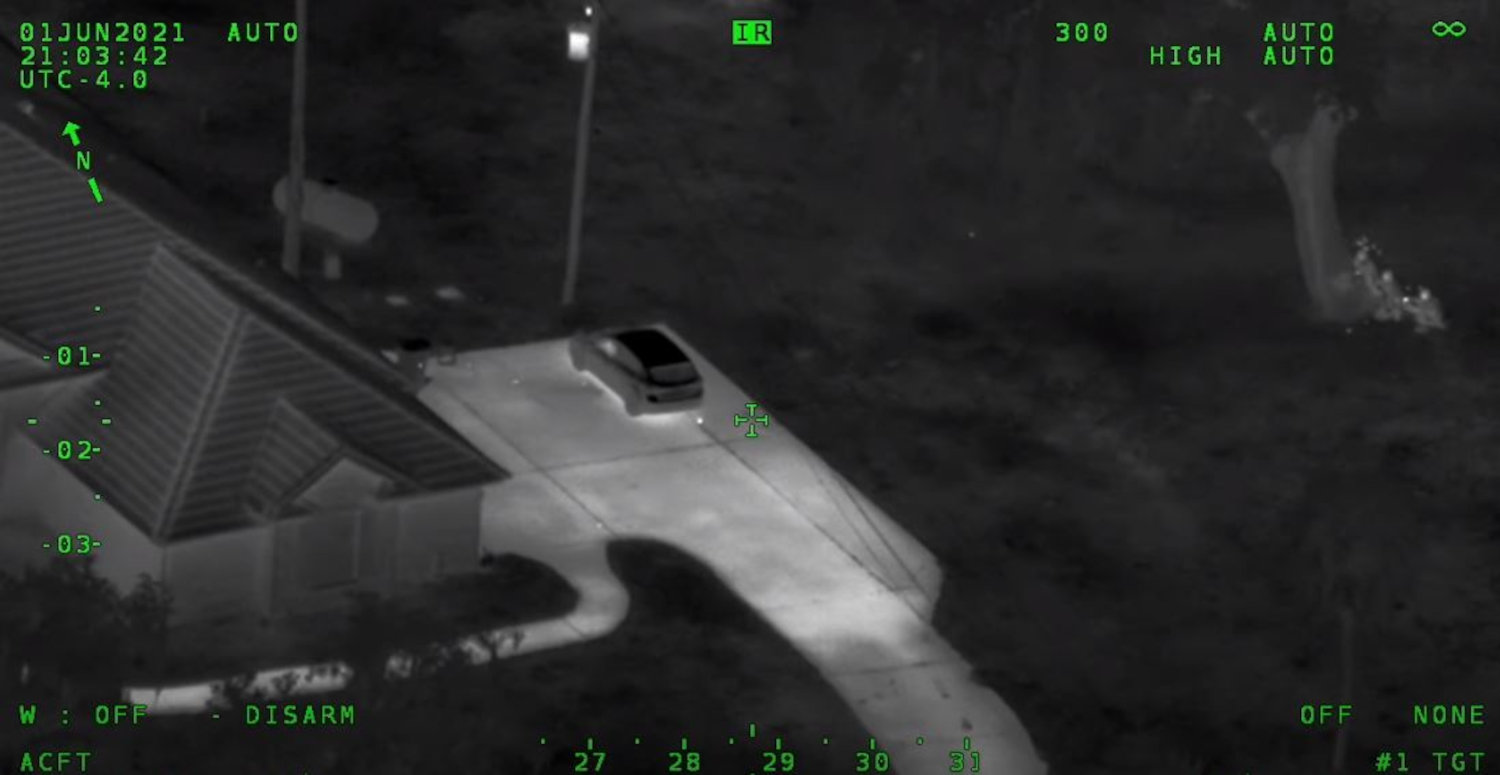 Footage from Air One just after 14-year-old Nicole Jackson opened fire on Volusia County deputies with a shotgun. Deputies can be taking cover in the top right corner of the photo by a tree. Jackson can not be seen from this angle.
Volusia Sheriff's Office
Posted Wednesday, June 2, 2021 3:40 pm
Sean Mooney

DeLand, FL - In the wake of a shooting where two juveniles opened fire on law enforcement, the Volusia Sheriff's Office (VSO) releases body camera and helicopter footage of the incident as the sheriff comments on the case.

The two juveniles involved in the incident, 12-year-old Travis O’Brien and 14-year-old Nicole Jackson, reportedly ran away from the Florida United Methodist Children’s Home (FUMCH) around 5 p.m. on Tuesday (June 1).

According to VSO, the initial call was that a 12-year-old, who is diabetic, left the home's campus with a 14-year-old, who may or may not have struck a guard with a stick; that matter is still under investigation.

Deputies searching the area later learned of a possible break-in at a home on Enterprise Osteen Road. When deputies arrived at the home, they found the two subjects inside the house and learned they were armed. Later, as deputies tried to deescalate the situation, the two juveniles opened fire on law enforcement, which occurred multiple times throughout the standoff.

At some point during the night, Jackson stepped out of the home through a garage and pointed a shotgun at deputies who opened fire on her, injuring her. She was then taken to the hospital with life-threatening injuries, but is now said to be in stable condition.

Volusia Sheriff Mike Chitwood spoke to reporters the day after the incident to discuss the shooting and began to track the problem back to where he believes it began, the Department of Juvenile Justice (DJJ), and more specifically, the group home the two suspects came from.

"FUMCH has been a problem since I've been the sheriff and beyond," said Sheriff Chitwood.

In a file released by the VSO in the midst of this investigation, the sheriff's office revealed that law enforcement was called to FUMCH hundreds of times between 2019 and 2020, with 89 calls coming in this year already.

FUMCH was also the same group home where a 14-year-old named Christopher Carpenter, another resident at the facility, attacked a security guard. The guard, who was later identified as 52-year-old Michael Ellis, passed away from his injuries a week later. Since then, Carpenter has entered a no contest plea for manslaughter.

According to Sheriff Chitwood, problems like this stem from Florida's DJJ.

"We're arresting these kids for violent crimes and the Department of Juvenile Justice wants to put them in places that can't handle them," commented the sheriff.

"The juvenile justice system is broke," added Chitwood. "People need to face facts. Instead of listening to faith groups... we have an awful lot of violent criminals who are teenagers."

"Let's face it, nobody is saying 'don't help somebody who doesn't want help.' We have people out there who are beating people to death and taking on deputies and opening fire," said Chitwood. "Something is not right."

Chitwood later stated that eight deputies have been placed on administrative leave as the Florida Department of Law Enforcement investigates the incident, which is standard with officer-involved shootings.

Charges against O'Brien and Jackson remain pending at this time.