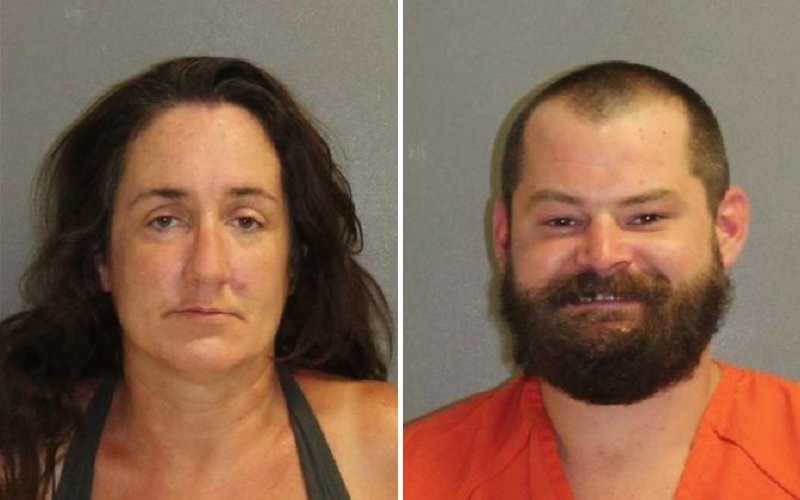 Daytona Beach, FL -  Two people, 42-year-old Carrie Tyrrell and 26-year-old Jeremy Zeigler, remain in the Volusia County Jail, after Daytona Beach Police say they beat a man, who is white, unconscious, because they didn't like the fact that he was helping another man, who is black, pick up trash.

The accident happened early Thursday (August 27) morning in front of 709 Butler Boulevard. DBPD arrived on scene at 6:13 a.m. to find the victim unconscious on the ground. EVAC arrived and started medical treatment, bringing the victim back to consciousness.

The victim told police that he stopped to help the man picking up trash at about 5:30 a.m. He said the man and woman, who he identified as Ziegler and Tyrrell, came outside and starting yelling at him and shouting racial slurs. The victim said the pair starting hitting and kicking him and couldn't remember how he ended up on the ground.

The victim was transported to Halifax Medical  Center as a trauma alert. Officers spoke to him in the hosptial, where he reported his wallet, carrying miscellaneous cards and his ID, was missing from his pocket. He told officers he vaguely remembers someone going through his pockets.

A witness to part of the beating came forward to talk to police telling them he heard yelling and screaming around 5:40 a.m. in the area of the 700 block of Butler Boulvard. The witness said he approached the area and saw the white man and woman standing over the victim, stomping and kicking him. When they saw the witness, they went back in their apartment. He walked away to get his phone and call police. When he came back to the victim, the suspects were again standing over the victim. The witness said the man took something from the victim's pocket. The pair saw the witness, went back to their apartment, and left behind bloody footprints.

The black man, who acts as an unofficial helper/manager at the apartment complex, was found in his apartment, where he went in "fear for his life." He told police he is in a squabble with the suspects and when they came out to yell at the man helping him, he went to his apartment. He claims he did not see the fight but did see Zeigler and Tyrrell dump a trash can over the victim's three-wheel bike.

DBPD says that a Florida Statute 775.085  which states that "Evidencing prejudice while committing offense" was used in reviewing the incident. The incident reports for both suspects state that "While it is clear that D-1 (Tyrrell) and D-2 (Zeigler) evidenced prejudice against the black male neighbor and that prejudice is their motivation for this crime, the black male is not the victim of a crime. V-1 is a victim because he dared help a black man."

Tyrrell is charged with Aggravated Battery with Bodily Harm and Robbery on a $15,000 bond. Zeigler faces the same charges with a total bondof $20,000.